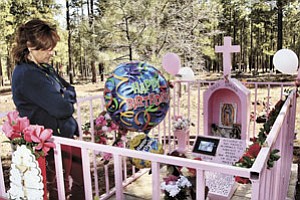 Maria Davalos visits the grave of her daughter, Dulce Davalos, who would have been 18-years-old April 21.

Maria Davalos laughs as she recalls how her 15-year-old daughter Dulce Davalos loved to dress up, accessorize with jewelry and have her photo taken in Flagstaff at the mall.

"She loved taking pictures her whole life. I have more pictures than you can believe. She'll be in this year's yearbook," Maria said.

Dulce - who would have been 18-years-old on April 21 - was tragically killed May 27, 2005 in an accident. Dulce and three of her friends were riding in the back of a pickup truck throwing water balloons. Dulce fell out of the truck and was struck by one of the vehicle's tires, receiving fatal injuries.

Dulce's brother, Lorenzo Davalos, graduated from Williams High School that night. Maria was unable to attend. However, Maria and her family will attend WHS graduation ceremonies May 23 in memory of Dulce. Dulce's class has chosen to honor her that night. An empty chair will represent Dulce.

"They said they will have a chair empty as if she were there and we will be sitting in the front," Maria said. "It's going to be so hard. I guess I will be expecting her to walk down that aisle and she's not going to be there."

Maria says that while it will be difficult to attend graduation ceremonies, she appreciates the gesture in her daughter's memory.

"It's a good thing. That way I know that her friends haven't forgotten her. I think it is a nice thing that they are doing," Maria said.

Born in Flagstaff and raised in Williams, Dulce attended Williams schools since kindergarten. Her mother says Dulce loved school. She played volleyball and was a cheerleader as a child. Weeks prior to her death, Dulce celebrated her quinceanera, a traditional Hispanic celebration.

"She loved hanging around with friends ... cruising with friends," Maria said. "Without her, our lives are empty. She was my baby. She was the joy of my house. I think about her all the time - as soon as we get up in the morning until we go to bed at night.

Since Dulce's death, the family has held a memorial Mass at St. Joseph's Catholic Church every May 27. This year will be the last memorial Mass.

"This is the last year we will be doing it (memorial Mass). I'm not putting this behind me. It's time for her to rest," Maria said.

"It wasn't her fault. This was an accident and we didn't want her charged," Maria says. "I have completely forgiven her. She and Dulce were really tight. As soon as she got paid, they were off to the mall to get their pictures taken. They dressed alike. The accident is going to be with her the rest of her life."

Maria said she doesn't have any advice for young people.

"Even if you give them advice, they're going do what they're going to do. I wish there was a law against riding in the back of a truck, but I don't think there is one," she said.

"Dulce's Law. The phrase says it all. The law would prevent youth from riding in the back of a truck. We need to decrease this type of stuff," Warren said.

Warren plans to take his idea before the Williams City Council in the future.

"The state has tried to pass such laws through the legislature several times in the past and has failed," said Williams Police Chief Herman Nixon.

Even though no such ordinance exists in Williams, Nixon says his officers stop all vehicles when they see passengers standing in the back.

"When we find a bunch of kids standing in the back of a truck, we cite the driver for having an unsecured load," Nixon said. "It may not fit, but it's all we can do."

Extra officers are added to shifts on special days such as graduation.

"We want to make sure they are all safe. We want to prevent them from getting hurt without interfering in their fun," he said.

April and May are difficult months for Maria as she reflects on Dulce's April quinceanera and her death in May.

"It is so hard, especially in April and May," Maria said. "She didn't know what she wanted to be. She did say she wanted to become a nun one month prior to her death. She kept saying it over and over. I guess she knew she was leaving."

Following the accident, someone called Maria to tell her that something had happened.

"When I got the call, I thought maybe it's just a broken leg or an arm. I don't know who called me. When I got there and saw her I knew," Maria said. "They said they just had an accident. When I got there, there were so many people there."

Every day is difficult for Maria as she mourns the loss of her daughter. Every day she remembers her little girl.

"I paid for her yearbook yesterday. I'll put it in her room. Her room is the same. I haven't changed a thing. Everything is the same. A lot of people ask 'why can't you give her clothes away? They are just hanging in the closet.' I can't see someone else in her clothes," Maria said. "You can smell her. The room never gets dirty. It's like she cleans it."

Maria visits Dulce's grave at least once each day.

"We are at the grave everyday. Sometimes 11, 12 o'clock at night we are there," she said. "She was a very special little girl. Everybody loved her. She was very spoiled. She always had her nails done, her hair done. She knew how much I loved her. We were very close. We did everything together."

Maria says the only way she has gotten through this tragedy is the presence of her remaining children.

"And my five grandchildren. They are a handful," said Maria. "We will always love her and will always miss her."