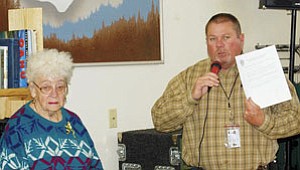 Officials with the Williams Police Department plan to begin a new program in Williams within the next few weeks designed to aid elderly residents of the city who live alone. The Daily Call program, according to Williams Police Chief Herman Nixon, will allow police officers to check on single seniors every day and verify their welfare over the phone. Should the phone not be answered, an officer will be dispatched to the residence.

Participants in the Daily Call program must be Williams residents, have a local home or cell phone number, and provide police officers with a key to their residence in order to qualify for the program. Interested individuals must sign an agreement with police administrators prior to being enrolled on the list of those who will receive a daily call. Elderly who live with someone else may also apply, should the person they live with be unable to render aid in an emergency.

"I think this program is going to be great for the elderly," Nixon said. "This program is nothing new. Page Police Department does the same type of program. Where I came from in Surprise they had the 'Are You Okay?' program, which was computerized and would automatically call people every day."

Nixon said there is no age limitation when it comes to the new program.

"We can have someone that's 50-years-old that has some kind of physical handicap or debility. If they live alone and if they fall or something happens and no one would know about it, they can also sign up for this program. The biggest thing is that they have to have some kind of, either elderly or live alone, some type of handicap or some type of physical (debility) to where, if something happened, they wouldn't be able to get to a phone. That's the reason were putting this program together. I think once we get this out, people can start coming in and filling out applications. I'll look over and approve them. We hope to get this program up and going within the next couple of weeks. We really need people to start signing up for this so we can get it moving."

The decision to begin the call program in Williams, Nixon said, stemmed from recent incidents where elderly residents had fallen and were unable to summon help.

He said the daily call program is designed to allow officers to check on area seniors twice a day.

"You have to live alone and we've got to get a key to your place," Nixon said. "What I didn't think about when I started this program, but was brought to my attention is that we have a lot of elderly people who can't hear. What we're going to do with those people is that, if they can't hear and they can't hear a phone ring at all, then what we'll do is we'll set up a specific time with them, when they get out of bed and we'll send an officer over there to physically check on them once a day. Part of the criteria on this is that they have to fill out an application and they have to fill out all the information we need on who to contact, relatives or doctors, things of that nature."

Nixon urged that individuals involved in the Daily Call program call the police department prior to leaving town for vacations or other extended outings.

"When people are going away for the day or going on vacation, they need to make sure that they call us and let us know that they are going to be gone," he said. "We can't just keep sending officers over there, so we really want to make sure they adhere to this program. If we call there and there's no answer, we will send a police officer over there."

Nixon urged all interested parties to contact the Williams Police Department at (928) 635-4461 for more information on the Daily Call program.

"Our dispatch will be the ones making the phone calls," he said. "We'll have a list out. They'll be called once in the morning and once in the evening. They can also request to be called just once a day, but that's what our plan is now."