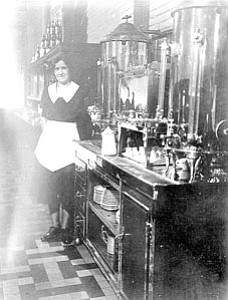 Tillie Raugh, Don Gray’s grandmother, was a Harvey Girl at the Havasu House in Seligman.

SELIGMAN - The sounds of clinking china cups and laughing ladies have been gone for years at the Havasu Harvey House in Seligman. And soon, possibly this week, the Havasu House itself will be gone.

"My grandparents met there in 1916," Don Gray said. "My grandmother was a Harvey Girl and my grandfather owned a garage in town. They met and married in 1916 and my mom was born in 1917."

The Havasu Harvey House - built around 1905 and closed in 1955 - sits a stone's throw from the Burlington Northern Santa Fe railroad tracks and one of the few remaining original stretches of historic Route 66. The BNSF owns the Havasu and its surrounding land.

When word leaked out about five years ago that the BNSF planned to demolish the hotel, Seligman residents mobilized to stop its demolition. When that failed, they tried to raise enough money to buy and move the building.

Railroad officials offered the hotel for free to anyone who would move it from their land.

"We've been working for almost a decade to donate the hotel but have been unsuccessful," said BNSF spokeswoman Lena Kent. "From a safety perspective, it is in the best interest to take it down. So, it will be coming down within the next two weeks."

Gray said he understands the safety concerns - BNSF officials let him go inside the hotel two weeks ago to photograph its interior.

In 1916, when Gray's grandfather, Charles Greenlaw Jr., met his future bride, the former Tillie Raugh, Charles owned a garage in Seligman. Tillie was a Harvey Girl making around $17.50 per month including room and board.

The Harvey House was the brainchild of Fred Harvey. He opened his first "depot restaurant" under contract to the Santa Fe Railway in 1876 at Topeka, Kan. His empire eventually included 84 Harvey Houses near train stations and tourist stops throughout the country.

Two of the most famous Harvey Houses continue to thrive - El Tovar at the Grand Canyon and La Posada in Winslow. Visionary architect Mary Jane Coulter designed many of the Harvey Houses, but she did not design the Havasu House in Seligman.

"Once upon a time, the Havasu had grand gardens at its southwest corner, which may be one reason why the ground floor of all but the trackside façade bears no trim, while the second floor trim simply repeats the half-timbering on the main, south façade," wrote Seligman historian and resident Mary Clurman on

Angel Delgadillo was born in Seligman in 1927. He spent most of his adult life cutting hair in his father's now-famous Seligman barbershop.

"It was just a beautiful hotel in a beautiful era," he said. "For us boys, it was exciting to see the passenger trains pull in and watch the people get off and stretch their legs or go inside and eat.

"We would fantasize about all the parts of the world these people were traveling from. We would go down and mingle with them and pretend we were passengers traveling around the world with them."

Angel's daughter, Mirna, grew up in the shadow of the Havasu House.

"When they tear it down, we are going to lose a gem of history for Seligman and for our country's heritage," she said. "It is a very sad, sad day to lose it.

"One of my aunts was a Harvey Girl and met her husband there. That hotel has a very special place in my heart and the heart of Seligman."

(Editor's note - Bruce Colbert is a reporter for the Daily Courier, a sister publication of the News. Contact the reporter at bcolbert@prescottaz.com.)