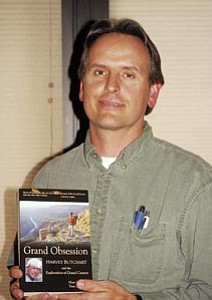 Williams physician Tom Myers has recently added another tome to his growing collection of books concerning the Grand Canyon. Having written two previous canyon-related books, "Over the Edge: Death in Grand Canyon," which Myers co-authored with Michael Ghiglieri, and "Fateful Journey" with co-authors Chris Becker and Larry Stevens, Myers has now collaborated with writer Elias Butler on his latest endeavor - "Grand Obsession - Harvey Butchart and the Exploration of Grand Canyon."

Myers paid a visit to Williams Rotarians during their regularly scheduled meeting April 3 to talk about the project. He offered Rotarians a glimpse into the life of Butchart, famed Grand Canyon hiker, explorer and the topic of his recent book.

"This is the story of Harvey Butchart, 'Grand Obsession' is the book I (co-authored) with Elias Butler," Myers told members during the meeting. "It's about Harvey Butchart and his life and it's also about the history of exploration on foot."

Butchart, Myers explained, spent much of his life at the Canyon.

Butchart was born in China. There, Myers explained, hung a picture of Grand Canyon in the family's living room. Butchart's father, James, went to China as a missionary - where he would eventually meet Butchart's mother, Nellie.

"The man who would be destined to be the Grand Canyon's greatest hiker, as a small child, before he could remember, saw Grand Canyon every day," Myers said.

Butchart began hiking as a small child in China. After his father died from a blood clot when Butchart was eight-years-old, the family eventually moved back to the U.S., where they settled in Illinois, according to Myers.

"He was really bookish, very smart - a genius IQ, a really excellent student, but he didn't do well in team sports. He did well in tennis."

Co-author Elias Butler traveled to China to take photos of the area where Butchart grew up for inclusion in the book.

"He's an extremely gifted writer and wonderful photographer," Myers said of his co-author during the April 3 meeting.

"I started this biography in the early '90s, collecting data on Harvey Butchart, interviewing him, collecting stories and talking to people, writing lots of letters," Myers said. "I found out there was a lot of strife between he and his wife over his obsession, so he stuffed it all in a box."

Myers said he met Elias Butler roughly eight years after he began to collect data on Butchart. Both decided to resurrect the biography a few months after Butchart passed away in 2002. Butler and Myers even hiked some of the routes that Butchart hiked in his day to get a feel for the man's love of exploration.

Butchart was a mathematics professor for a number of years. He retired from Northern Arizona University and eventually moved to the Phoenix area with his wife Roma. His love for the Canyon remained, however. Myers explained that Butchart would often travel by air mattress to cross the Colorado River. The rigors of time, Myers added, eventually caught up with Butchart.

"It was only time that eventually caused him to quit hiking. He'd still be hiking, I think, if his joints didn't give out. He got bad arthritis," Myers said. "'Grand Obsession,' which started to be Harvey's life and the history of exploration on foot, really is a look at obsession. It's a look at human nature when we obsess over anything, whether it's stamp collecting or football or hiking and living with the decisions we make."