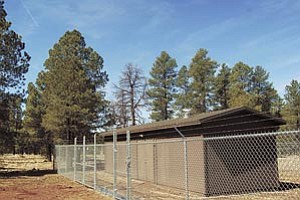 House Bill 2772, concerning Williams' Dogtown I and III water wells, has made it past the Arizona House of Representatives and will now head to the senate floor for approval.

According to Williams Mayor Ken Edes, Gov. Janet Napolitano may sign the bill into law within the next six to eight weeks. State Representative Lucy Mason, along with Edes and Williams City Manager Dennis Wells, introduced House Bill 2772 during a meeting of the Water and Agricultural Sub-Committee March 6. The bill would transfer a portion of the Dogtown I and III water rights from the Verde River Basin to the Coconino Plateau Basin. Had the bill not been passed in the legislature, the wells may have faced closure.

"It will go through the Senate Committee. It will probably have a couple of changes in it. The committee will approve it. It will go to their rules committee. It's already passed the same rules committee, so it would pass that, and then it goes to the caucus of the whole for the senate side. Then it goes to the floor. They'll vote for it. Since it will probably have an amendment on it, it will have to go back for ratification on the house side, but it doesn't go back through the committees or anything else. It just goes to the house as a whole. We're probably talking another four weeks. Then it goes to the governor for signing and that probably takes another two weeks, so six to eight weeks before it's all finalized."

The bill would make an alteration to Arizona law, Edes said.

"We're putting an inclusion into the water law to allow these two wells to continue to be pumped," Edes said.

The search for water in Williams, he said, will continue, though officials will now seek new areas in which to drill.

"It doesn't make sense, currently, for us to go on top of that hill to try and drill somewhere around there," Edes said, adding that officials with the United States Geological Survey plan to visit Williams in May to discuss future water plans and possibly seek out new locations.

"We're kind of looking out toward the airport maybe, some of the locales that we can, not only drill, but have access to infrastructure that's fairly accessible. We know we'll probably have to create some more infrastructure," he added.

According to state officials, water from the Dogtown I and III wells is pulled from the Verde River Basin, which technically does not belong to the city of Williams, but to the communities in the Verde Valley Area. Williams officials became aware of the mistake during negotiations for additional well locations south of town, in an area owned by the Pouquette family, and notified the Arizona Department of Water Resources (ADWR), who originally permitted the wells for Williams.

Communities in the Verde area also became involved in the legislation. Clarkdale Mayor Doug Von Gausig, for instance, said he believed the mistake was an honest one. Officials with the city of Clarkdale did not object to the legislation, though Clarkdale officials did ask for a number of amendments to House Bill 2772. Amendments included a population cap of 8,000, a request for better communication between municipalities when it comes to drilling large-scale wells, the installation of monitoring devices as well as other items.

"Because we've been dealing with the Verde Valley mayors and the concerns down there with Yavapai County, we've kind of come up with a couple of small compromises so to speak. We'll amend the bill slightly to add those," Edes said. "One is a cap to our population. If we reach 8,000 people we will lose the ability to use those wells. They didn't want to agree to something that's going to allow us to continue to grow and become huge. Those wells are on the wrong side of the line and so they asked for a number and if we got to that number we'd have to be doing other things anyway. The most we'll probably ever (reach), currently, with what we have for land is probably 5,000 or 6,000, so 8,000 would require us to be doing something different. The other stipulation they asked is that we put in there that we would use, to the best of our ability, the surface water before we would pump those wells. Cost wise that makes sense, because those wells cost almost $1,000 a day to pump just in electricity."

Edes said the wells are only typically pumped when the lakes are low and "on demand" as well.

Besides wells, Williams currently operates five reservoirs throughout the city. While the demand of Williams' water supply varies at certain times of the year, it can see a peak demand of as high as one million gallons per day. The usage drops in the winter, however, and can fluctuate between 4,000 to 5,000 gallons a day. The search for suitable wells in the Williams community has currently cost the city over $13 million.

Edes and Wells both spoke with officials, including the mayors, of a number of other towns in northern Arizona, such as Sedona and Prescott. Edes also testified on behalf of Williams and made numerous trips to Phoenix in order to help "sell" the bill to senators. A lobbyist was also hired to help further the bill.

"I would have to say the majority of the work has been done," Edes said, saying that there are still some officials in the Yavapai County area who are not altogether happy with the bill.

"There are two wells and they've got over 700 wells along the river, so it's very small percentage of what they're pumping, but they take their resources very seriously," Edes said. "We've actually got them to a place where they're not going to oppose it adamantly. They're not trying to kill the bill. We've actually got some of the mayors that are in support of it."