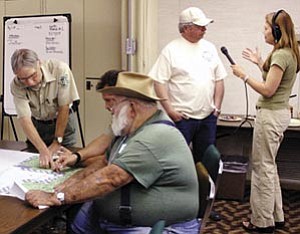 Forest Service officials meet with citizens last May to explain the travel management proposal. More meetings are planned this month.

The Proposed Action focuses on needed changes to the existing motorized transportation system on the district. It does not propose any changes to non-motorized travel such as hiking, horseback riding and bicycling. The Proposed Action designates about 1,300 miles of roads as the district transportation system open to motorized travel. The document also proposes several other actions including the following:

• Prohibit motorized travel off designated routes, unless authorized by an exemption.

• Add approximately 25 miles of motorized trails to the transportation system.

• Authorize cross-country travel up to one mile off system roads to retrieve a legally hunted and tagged elk during the warmer months of September and October.

"The development of this proposal took longer than expected," said Williams District Ranger Martie Schramm. "However, we felt it was important to take the time to produce a good product. We believe that, if implemented, this proposal would result in a sustainable system of roads, protection of resources, and continued access to the forest."

During the work sessions, resource specialists from the Kaibab National Forest will display maps showing the proposed transportation system and the rationale behind it. Members of the public will be able to review that information and provide input. The public input received from the work sessions will be used to refine the Proposed Action and develop alternatives to it.

"We did what we could to make this a solid proposal," Schramm said. "Now we need to hear from forest users. We encourage people to visit our Web site to view the proposal and maps and also to attend one of our work sessions."

Comments on the Proposed Action should be submitted by May 9.

The Kaibab National Forest, along with all the other national forests and grasslands in the country, is undertaking an analysis of its transportation system. That transportation system ranges from paved roads designed for passenger cars to single-track trails used by dirt bikes. In addition to this managed system of roads and trails, the Kaibab National Forest has many user-created roads and trails. The result of the travel analysis process will be the creation of a Motor Vehicle Use Map, which will identify all the roads, trails and areas on the forest that are open to motor vehicle use.