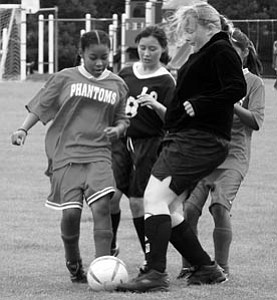 The Phantoms middle school soccer team is 4-2 on the season after a pair of wins over Parks and Seligman in home action last Saturday.

The team beat Parks 5-0, with two unassisted goals by Ethan Berry, as well as goals by Joey Bankston assisted by Kaylie Wadsworth, Wadsworth assisted by Jerrith Foster and Tatyonna Jeter on a penalty kick.

Later on, they came out over Seligman, 3-0, with goals by Bankston, assisted by Mollie Struble; Berry assisted by Victor Ibarra and Herman Valerio assisted by Ibarra.

They won against those two teams in their first outing and lost to Northland Prep and Ash Fork the second weekend.

According to Head Coach Ken Hunter, nearly 30 kids joined the team this year - about a third of the middle school. There are so many players that there aren't enough uniforms to go around.

They are improving by the week, he said.

"They're making a lot of progress," he said. "The passing is better after the first couple of weeks of just kicking the ball around. They're more aware of where things are on the field and where their teammates are."

Next weekend the team travels to Page, and the weekend after that, they will play in Ash Fork. The I-40 league finals will be held at Grand Canyon on Oct. 13.