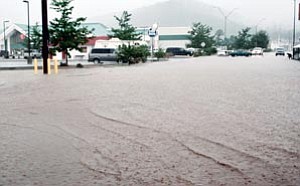 Water flows across Route 66 during a rain storm in August. Drainage concerns and flooding were discussed during the Sept. 20 meeting in regards to the proposed Forest Canyon Estates subdivision.

Williams residents concerned about increased traffic, emergency accessibility and drainage appeared before the Williams Planning and Zoning Commission during their regular meeting Sept. 20. The residents live near the proposed Forest Canyon Estates, which is located in the upper southwest corner of the city.

The TMD Group, developers of FCE, appeared before P & Z to request a rezoning of the subdivision to estate residential. The zoning for the property had been divided into two separate divisions - AR (agriculture) and R1-7 (single family residential with a minimum lot size of 7,000 square feet). The subdivision, which originally called for close to 120 lots, has been scaled back to 70 lots. Estate residential zoning mandates that lots be a minimum of 15,000 square feet.

Some of the lots in the 60-acre subdivision are 15,000 square feet, some are one acre and a few are over one acre, according to the developers.

P & Z approved the rezoning. P & Z Commissioner Karen Peters - who lives near FCE - recused herself from the public hearing and final vote.

The Williams City Council voted against the subdivision March 8 in a 4-2 vote, sending the TMD Group back to the drawing board. With P & Z's approval, the subdivision will go before city council Oct. 11 again for final approval.

Dan Rhea and Mason Cave of the TMD Group, along with Guillermo Cortes, an engineer from Shephard-Wesnitzer, Inc. in Flagstaff, appeared before P & Z and were available to answer residents' questions.

Rhea said the TMD Group continues to work closely with the city of Williams to improve drainage issues in the area surrounding the subdivision.

Residents in the area of Allston Way and Tenth Street experienced flooding that resulted from heavy rainfall in early August. Commissioner Bill Baptist questioned if a retention basin installed by TMD would be effective.

"What would happen in the same situation?" asked Baptist. "While it is not your responsibility, be good citizens and think about what could happen."

"The water would flow towards the railroad along adjacent city-owned land above Tenth Street," Cave said.

Cave added that whenever there is flooding, more dirt is compacted above the culverts.

"The culverts have been flattened," Cave said.

"The neighborhood should be excited," said Cortes. "A lot can be done for this drainage problem and this neighborhood."

"Once the homes are built it will be an improvement," said Commissioner Oscar Fredrickson.

He added that the new homeowners will remove the debris.

Cave stated that the debris is not completely natural.

"The debris is anything from chairs to tables ... anything that has accumulated over the years," Cave said.

Area resident Janet Cothren expressed concerns with ingress/egress and an increase in traffic.

"Has one ingress, one egress changed? That was (city) council's denial," said Cothren.

Cave responded that one primary and one emergency access exists. A crash gate at Arcadia will be located 300 feet from Tenth Street and four blocks to South Sixth Street. The primary access is Allston Way.

"There are currently 70 homes in the lower existing neighborhood. You are adding another 70 homes onto Allston," Cothren said.

Cave stated that, per a traffic study, the area could increase by 95 lots.

"We are at 70 (lots). We are down-zoning from the current zoning requirements," Cave said.

"This is still an average of 140 cars coming into a neighborhood accustomed to eight," said resident Jeana Stevenson.

Cave stated that Allston Way, which is currently only one-half its width, would be paved completely.

"I'm for anything that can be done to improve drainage," said resident Bob Rantz. "I'm not going to fight. I was in my yard during the floods."

Cave asked that residents keep in mind that it will take time to complete the construction of the subdivision.

"It's going to take a long time to build this out," he said.

Stevenson asked where the construction staging area would be located.

While the construction staging will be on FCE's property, it is unknown where, Rhea said.

"Construction details will be discussed at a later date. It will be contained on our property," said Rhea.

"Please be considerate to all neighbors," Commissioner John Dent stated.

Rhea and Cave nodded their heads in agreement.

"There will be architectural guidelines. There will be no tract homes. Houses will be built with natural materials and color pallets to help them blend into the natural surroundings," said Rhea. "You won't have tract housing from our development."

"This is it. There will be no Phase II," Cave said. "In addition, 24.7 percent (15 acres) of this property is open space. We will be working with Carol Glassburn in developing a trail system not only for the benefit of our residents, but all residents."

Cave stated that access to Clover Springs would remain. Trails from Buckskinner Park could eventually lead to the subdivision's trails.

"There are no definitive plans yet, but we are working with Clean and Beautiful," he said. "The land has been here a long time. In the spirit of being good neighbors, we can answer both of those ... trails and drainage."

"Improving drainage will help alleviate flooding problems," said city of Williams Planner Harry Holmes following the meeting. "The developers can't be expected to do more than deal with the water on their own site. If they do go beyond, that would be for the public's benefit. The best use would be to tackle the drainage problem."