Williams youth get to stepping
Walk to School Day on Oct. 3 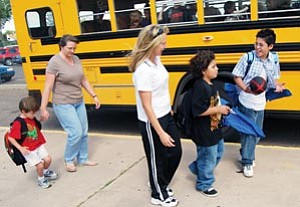 Doris Ann Mertz, Safe Routes to School coordinator, walks with children and a parent to their school bus. International Walk to School Day is scheduled for Oct. 3.

On Oct. 3 a lot more youth in Williams may be walking more than normal as part of the International Walk to School Day. The event also serves as the official kick-off for the new Safe Routes to School program, which is offered through the Williams Unified School District and the Williams Alliance. Volunteers are currently being sought to help with the program as well.

"The Safe Routes to School program is a program that we're just starting this year," said Doris Ann Mertz, Safe Routes to School coordinator. "We're using the money that we got from the Arizona Department of Transportation. Overall it's to help increase the activity amongst kids, because we're concerned about increasing levels of childhood obesity and type two diabetes, the increase of that among kids."

Mertz said one of the ways to encourage better health among children is to encourage them to walk or bike to school. She has been working closely with the Williams Alliance, who facilitated the grant, and has been actively working to obtain data on how many children walk, ride or bike to school in the Williams area. Mertz also helped coordinate the Oct. 3 International Walk to School Day, though Mertz added that walking and biking to school alone aren't the only plans for Safe Routes.

"We're not limiting our program to that. We're wanting to get them to walk and bike and just be more active in general," she said. "Ones who don't live close enough to walk and bike, we're still going to give pedometers to (them) and encourage them to keep track of their miles and we're going to have reward programs and reward kids and have classroom contests for who has the most mileage and things like that."

She said that inter-mural activities are also planned to keep the kids active during middle school recess.

"Some will be walking, but some will be signing up for volleyball and basketball and flag football. A lot of times middle-schoolers will just stand around at recess or text message or do things like that," Mertz said. "Overall, my goal is just to get kids to be more active, increase their activity levels. It's just something I've always believed in. When I was a kid we had about 100 kids in our school. We had two obese kids in our whole school, so we had about two percent. If you look at the schools now, there's a lot higher percentage than that."

Other plans for the program include the installation of speed detectors in school zones.

"There are five aspects of the Safe Routes to School program we're supposed to work on. Education, that's when we go into the school and talk to (students) about it, about eating well and being active and give them the safety information on walking and biking, etc., and there's enforcement, the police are trying to be more evident in the mornings and cruising around our school zones, then the engineering," Mertz said. "We don't have any infrastructure money in the first year. You can get infrastructure money in later years, so pretty much any engineering (projects) will be just to make the crosswalks look a little better this year, where you notice them, and putting up the radar signs once we get them."

Volunteers, she said, would aid in getting the children to walk to school.

"On Oct. 3 and on organized days we're going to have volunteers," Mertz said, adding that volunteers will accompany children to school in a number of different locations in town. "Those who normally ride in on the bus or ride in on family vehicles, we're going to have two locations they can be dropped off at: the high school and the Holiday Inn. They can walk on in with volunteers that will be waiting for them there."

Mertz is currently seeking volunteers from a variety of different Williams' locations to help walk the children on Oct. 3. For more information on October's Walk to School Day, contact Mertz at (928) 635-9645. She encouraged adults interested in aiding to walk the route prior to the event in order to determine how long it would take to accomplish the trip with children prior to the start of the school day. Kids are also encouraged to bike to school Oct. 1, though Mertz added that there will be no adult-led "bike trains" offered on that day. Mertz added that she would like to have a list of volunteers finalized by Sept. 21.

"They have what they call 'walking school buses,' which is (that) you meet up with kids that are walking and you walk with them, that way the little kids don't have to be walking on their own, they can meet other kids that are walking and walk with them. I'm also going to work with a core group of volunteers," Mertz said. "We're going to have more than one walk to school day throughout the year. We want to have a hiking club and a biking club that does something on the weekends, like a one weekend hike or bike each month.

"Since we are a nutrition program, our angle is promoting

breakfast," Caldwell said. "We're going to do some education prior to Walk to School Day in the classrooms about why we need to eat a healthy breakfast and what makes a healthy breakfast and tie that into walking to school and being healthy and feeling good. We're going to be here. We've got a bunch of volunteers from our program. We'll probably be the ones in crazy costumes. We've had a lot of success with these days in our Flagstaff schools. We try to pick a different school each year to focus on and hope that, once we've showed them how to do it, that they can continue on in the future."

Another to addition to the International Walk to School Day program is a diabetes awareness program, put on with the help of Rose Marie Rincon, who operates the Williams Diabetes Support Group from the Williams Senior Center.

"We're going to have a speaker come from the Arizona Diabetes Association," Rincon said, adding that youth in today's world run a one and three chance of developing one type of diabetes or another within their lifetime.

"Ten years ago that was unheard of," Rincon said.