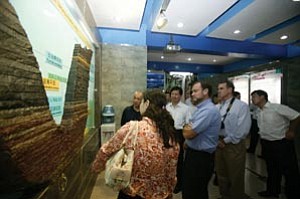 Grand Canyon Superintendent Steve Martin joins tourists in viewing an exhibit on rock strata at Yuntaishan World Geopark. Strata exposed by river erosion is one of the features shared with Grand Canyon National Park with whom the China park signed a sister park agreement last month.

While visits to numerous national parks and cultural sites marked the trip that Grand Canyon officials made to China last month, it was something in a bathroom at the Imperial Gardens that really drove home the point that great, iconic places transcend borders and belong to the world.

"There was a picture of Grand Canyon," said park Superintendent Steve Martin. "It just shows the incredible appeal, that these places have great world value."

That shared understanding was the underpinning of a sister park agreement between Yuntaishan World Geopark and Grand Canyon, signed by superintendents of both parks on Aug. 27 in Beijing.

The relationship was initiated around the first of the year through Beijing Normal University, by a Chinese interpreter pursuing a doctorate in interpretation at the school and at the University of Missouri in St. Louis.

As they were looking for a park to partner with, Martin said that Grand Canyon was a logical choice.

"It wasn't just that they picked us out of the blue," he said. "Their park is a geologic park also."

Mount Yuntai Park has deep canyons carved by rivers, exposing rock strata similar to Grand Canyon's in structure and age progression. A key difference and one driving the Chinese to seek international support, however, is the age of their national park system. At 25, it is facing some of the same pressures America's park network faced in its youth. In a short time, annual visitation at Yuntaishan has exploded from 200,000 to over 2 million, the result of a growing middle class with disposable income for domestic travel. Chinese interpreters are interested in learning more about Grand Canyon's educational programs to provide services for these visitors.

"That's one of the big requests they had," said Director of Environmental Education Jacob Fillion, who accompanied Martin and wife, Cyd, on the trip. Next month, Grand Canyon will send two members of the interpretive staff to China to take part in a conference on teaching geology in national parks.

"They'll be there to present papers and help facilitate it," he said. "And we're in the process of developing an action plan that will include some technical exchanges."

This will include some back and forth travel between park interpretive and resource protection staff to help the Chinese develop a technical training program that can apply to parks throughout the country.

China has more than 180 national parks, categorized much like those in the U.S., with some, like Yuntaishan focusing on natural wonders and others like the Forbidden City preserving national culture and history. But, said Martin, the pressure of 1.3 billion people makes it harder to set aside vast areas such as America has done in the west.

"They have some tremendous resources but generally their parks are quite a bit smaller," he said.

They also have a long way to go in terms of resource protection, lacking programs to restore biodiversity and contending with the nation's rampant pollution problem. Martin is hopeful that partnerships like the one with Grand Canyon will help effect the same kind of change that America's conservation movement in the 1960s and 1970s did.

"They're probably not unlike what we were going into, in the big industrial boom at the turn of the century and so on," Martin said. "I think that the parks and the consciousness that parks raise can help with that. They're investing a lot in some of these parks in restoration and establishment, developing focus on the environment and also leisure time. It's a really sort of productive time to be involved and share ideas."

Martin said the exchange will go both ways, especially as more Chinese apply that rise in income to international travel. The trend is such that the next foreign language edition of the park newspaper, The Guide, will be in Chinese, Fillion said.

"It isn't only us helping them," he said. "I think with us having these exchanges, it allows us to see things with new eyes and tackle different problems or the same problems from different vantage points."

For example, on the visit, they saw that Asians travel domestically much as they do in the United States - by bus, in packs, showing a keen interest in programs led by knowledgeable guides.

"We see it here - they're always in tour groups," Fillion said. "That's what we saw over there, quite a bit."

The Chinese are less apt to use the backcountry for hiking and camping, with the result that there are few trails into remote areas of parks. As parks in China prepare for an increase in western visitors, they are showing more of an interest in making the backcountry user friendly. In the developed areas, however, the infrastructure is in some ways more advanced than what's found here.

"In some cases, their use of electronics was superior to ours," Martin said. "We'll be looking at that at CVIP when we change the transportation plan and have to get a lot of information out in a lot of different ways. In a way they've really jumped to that without a lot of the constraints."

They also displayed remarkable workmanship on pathways, he said, creating them in a way to keep visitors channeled and limiting social trails.

"They have a lot of labor and very skilled labor," Martin said. "The trails that we saw, the granite and limestone trails to handle bypasses at the Great Wall, they're exactly the same quality as the Great Wall."

"It's amazing what they can do with concrete, to make it look just like the surroundings," Fillion added.

Funding the exchange is a shared effort. Martin said the sending agency generally covers air fare while the host park provides lodging and food for visitors.

"It's not incredibly expensive," he said. "While they're here, we can help out with some of their housing and other things."

International outreach to parks isn't a new concept. In fact, the idea of national parks is, in itself, an American export. But about a decade ago, funding for the Office of International Affairs was cut. Partnerships like this one, and a similar one being forged with Yellowstone, along with initiatives beginning between southwestern parks and those in Mexico, are signs that trend is reversing.

"I think this is a way of on a park by park basis regrowing that interaction with the international community," Martin said. "We feel this is really important and productive and I think the International community feels this is really important. The National Park idea is this great gift to the world from the United States. But if we're going to do that, we're going to have to support it with a level of true international exchange."