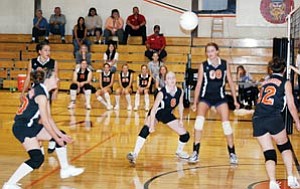 The Lady Vikes put together a strong group effort in their Sept. 14 game against grand Canyon.

"We played the younger of the JV teams and we really tried to focus just on the fundamentals of volleyball and getting bump, set and spike, which really worked because they gave us a lot of free balls. They did very well," said Lady Vikes Coach Jennifer Carter. "Everybody got playing time."

"My younger girls, some of my sophomores; they got a lot of playing time. I pulled out some of my seniors, because we were winning early on," Carter said.

Jenise Pettit had a standout game in the hitting department with six kills. Darian Quasala took home three kills for the night as well.

"They all played really well. They had to really focus," Carter said. "They got a lot of free balls back and they're not used to that, so they really adjusted well."

The Lady Vikes took the win, yet again, in three matches.

"She did very well hitting and blocking," Carter said. "Kassie Pettit was also a standout server."

The lady Vikes traveled to Ash Fork Sept. 18 for a couple of matches beginning at 5 and 6 p.m. The Ladies then travel for a tournament match against the scrappy Joe City team Friday and Saturday.