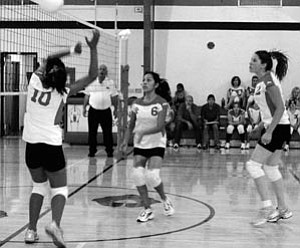 The Lady Phantoms played to vocal home crowds this week, treating spectators to some fast-paced volleyball action. On Tuesday, their season-opener, they played Mogollon, and on Saturday they took on the tough Rock Point team. On Friday, they played Williams.

While they haven't brought home a win yet, Head Coach Jim Baum said that it's only a matter of time.

"I've seen a lot of improvement coming into the season," he said. "They're far more aggressive than they were. They realize they're back in the game."

He said that he and Assistant Coach Tia Semallie will be working on channeling the power on the court.

"There's a lot of strength out there," he said.

The Lady Phantoms travel to Joseph City this weekend for a two-day tournament, then face Ash Fork at home on Wednesday, Sept. 26. On Thursday, Sept. 27, they host NPA. Both games start at 4:30 p.m.