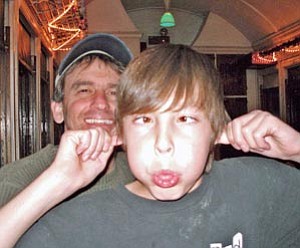 Do you remember swinging on the swings and seeing how far you could jump off? In his adult years, Big Brother Neil Weintraub never imagined that he would actually be videotaped doing such a juvenile act.

Every Thursday last school year, Weintraub looked forward to an opportunity to "escape and not worry about being adult." Weintraub says that he counted on those two hours each week to "go back and be a kid and think like a kid."

Weintraub and Justice shared lots of laughs by playing sports and inventing new ones, such as Hall Ball. Weintraub saw Justice grow from a shy kid to one who became very social with his peers during the school based mentoring sessions.

"Justice was quiet and reserved - he is not at all reserved now," said Weintraub

Weintraub enjoyed the cohort feel of the school based mentoring group. Even though he and Justice spent most of their time doing one to one activities, they often participated in activities with other Bigs and Littles. Hall Ball became a real hit. Weintraub recommends becoming a Big Brother or a Big Sister to anyone considering the idea.

"It's a great way to take a break from the rigors of being an adult, and it's great to know that you are helping a child by just being a friend," he said.

Weintraub admits that there may have challenging days, but in the end participants see the connections and close friendships that have formed not only between his or her Little, but between all the Bigs and Littles around you.

"It's a lot of laughs," said Weintraub.

The 2007-2008 school based mentoring program kicks off Sept. 27. Anyone interested in becoming a Big Brother or a Big Sister at WEMS should contact Big Brothers Big Sisters of Flagstaff at (928) 774-0649.