Don't give up hope on library
Wi-Fi, more computers to be offered at city’s library soon 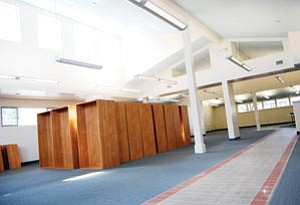 Shelves are beginning to arrive at the newly remodeled Williams Public Library, pictured above. Librarian Andrea Dunn said a grand opening will be held when work on the library is complete.

FAQs, or frequently asked questions, may as well start with this one: "When will the library reopen?"

The library closed May 8 for an extensive makeover and has been closed since, leaving many in the Williams area anxious to know when the facility will reopen. Though she could not give an exact date for the reopening, Williams Librarian Andrea Dunn said work is progressing apace on the project. An opening date for the library will be published in a future edition of the News.

"The construction was done very timely and it's the furniture that was the hold up," Dunn said. "They're paving the back parking lot finally (and) I am continuing to order books and process books so that, when I have shelves, I can just put them on there."

The shelves, she added, are slowly beginning to arrive.

"We're starting to get the shelves in," Dunn said. "When I talked to the kids delivering it, they said that the rest of the furniture should be coming in within the next two weeks. I was hoping it would be faster than that, but that's what we got. After I get the shelving in I'm going to have to take a good look at where to put things and then once we figure that out we can get everything in and opened. I'm hoping to get a couple of murals in here also, which would really be fun."

Besides cleaning and setting up workstations, a number of ceiling fans also need to be installed before the library opens. New heating and air conditioning units have also been installed in the spacious area. Wi-Fi Internet access may be offered at the library by as early as this winter. Computers in the library were set up Sept. 10 to allow Dunn to check in books that have been returned during the library's lengthy closure.

so that's what I'm working on."

A grand opening celebration is also in the works to introduce the new library to northern Arizona residents.

"We're going to have a bigger kids area, more space for study," Dunn said. "And it's all wired for computers, too."

She added that the library is expecting to add to its computer inventory, possibly by as many as eight machines, which would bring the library's computers to around 16 computers.

A section of the library, she said, will be devoted to local history. The new section will be located where the checkout counter used to be located. Dunn said she was excited to work with the local Williams Historical Society.

"That's not the commission that's with the city," she said. 'The society has been having a really hard time keeping any energy flowing and keeping people interested. One of their biggest things is having a place to meet, so we're going to have that going on in here, we're going to have literacy volunteers from Coconino County that are chomping at the bit to have a place to provide literacy, we have kids reading programs, we have the One-Stop from Coconino County job service. We'll start that up again as soon as we can."

The library first began in Williams in 1890 as a "men's reading room," according to Dunn, who added that the facility was located in the back of a store.

"Someone told me it was Kennedy's General Store," she said. "It was a reading room for men and then some women's group finally took it over and decided they wanted to build a real library, but it took them from the late 1800s to the 1950s to have an actual building and that was downtown where the bank is now. I've never seen a picture of it, but it was there until the 50s when this building was built. It moved up here in 1959."

Dunn has been at the Williams Public Library since 1990.

She said computers began to "trickle in" after the initial set up.

"For a long time we had one for the public to use, then we had four, then the Gates Foundation came in and gave us a couple more. So many people use the Internet nowadays, you can apply for jobs and get your hunting and fishing license and all that stuff."

Dunn said she is looking forward to the library's opening day.

"I'm anxious to get it going. I can't go out in public," Dunn joked. "I go shopping at Safeway in a disguise - in the dark. I'll ride my bike and people will yell at me, 'When's the library going to be open?'"