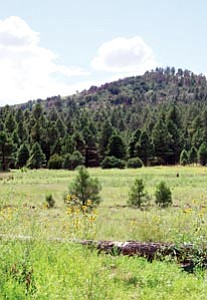 Developers with Forest Canyon Estates (FCE) plan to bring their proposed subdivision back before the Planning and Zoning Commission Sept. 20 during the commission's regularly scheduled meeting. The subdivision, which originally called for close to 120 lots, has been scaled back to 70 lots in the hopes that access and easement concerns could be eliminated. Members of the Williams City Council voted against the subdivision during their regularly scheduled meeting March 8 in a 4-2 vote.

"We are optimistic. We've been working hand in hand with the city and have gone through DRT and presented our new plan to the city and we feel it is a good solution for everybody's concerns," said Dan Rhea, principal and owner of the TMD Group. "Certainly with the recent drainage and flooding issues that happened, I think everyone can certainly understand that there's a need with some of that land up there to help with some of the drainage issues."

Rhea said the TMD Group is working closely with the city of Williams to help with drainage issues in the area surrounding the subdivision.

"There's a key component that has changed over the previous submission. We've reduced the density. We've made them all larger lots, Estate lots, which is the city of Williams' designation," Rhea said. "There won't be anything under 15,000 square feet. That's the lot. That has nothing to do with the house sizes. That could vary. We've turned this into complete custom homes, the new plan doesn't call for any tract housing."

Council's prior rejection of the FCE project meant that developers with the TMD Group had to begin the subdivision process from square one by first meeting with the city of Williams' DRT, followed by approval from the Williams Planning and Zoning Commission and finally going before members of Williams City Council once again.

Rhea said he believes that FCE may be close to finding a solution to the access question that surrounds the property.

"Our primary access has remained the same. We worked with the city and came up with a couple of solutions for our emergency access as well that we'll be presenting to Planning Zoning." Rhea said.

"We have their redesigned plat, their preliminary plat and rezone - redesigned in the sense that they've cut it down," said Williams City Planner Harry Holmes. "The basic street layout is the same (with), I think, two fewer cul-de-sacs. Nothing really changed other than that. They still need an emergency street access, which is perhaps easier to get in council than full-time road access. There won't be that. They'll be asking for an emergency-only access. With fewer lots, they can get by with a single road access."

Holmes said the reduction in lot density might help determine access measurements that may help alleviate traffic concerns for the proposed subdivision.

"The reduction in density - that will help. The access has always been a sticking point. I still don't see they've resolved it until the council says they have that," Holmes said.

As part of their revamped design, Forest Canyon Estates will set aside 25 percent of their total property for open space. Officials with TMD have also said they were working with the Williams Clean and Beautiful organization to develop trailheads that will access the surrounding national forest land.

"We have discussed opportunities for future trails," said Williams Clean and Beautiful Chairperson Carol Glassburn. "There are some existing trails up there at Buckskinner Park. I think it would look nice, but also provide some recreational areas for both the locals and the tourists."

Forest Canyon Estates consists of 60-acres situated on the southwest corner of the city of Williams. Officials with the TMD Group purchased the property from previous owner Charles Brookbank in 2004. Should the subdivision be approved this time around, TMD representatives said they would act as the management firm for the property.

"We'll offer lots for sale where buyers could build their own homes. We'll be involved in that," Rhea said. "There will be lots for sale and anybody is free to build whatever building they want to as long as they adhere to whatever guidelines are imposed. Those guidelines, generally speaking, are where we're going to require natural materials with a natural color palette that blends in with the surroundings."