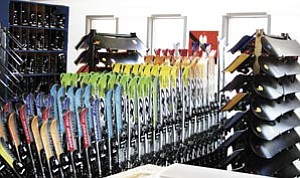 The Elk Ridge Ski Area recently purchased new ski equipment for renters, should a good snow season occur this year. Owners of the lodge and ski area hope to provide artificial “Powderpak” snow on a tubing run, that could draw thrill seekers to the area all year long.

Operators of the Elk Ridge Ski Area on Bill Williams Mountain are hoping to create a tubing run that would utilize synthetic "Powderpak" material in the absence of real snow.

The Powderpak overlay would be used in an area of the ski run that would be bermed off for use with special tubes as a replacement for natural snow, though the material can also be used in conjunction with real snow as well. The material is temporary and can be removed as necessary, according to officials with the Williams Ranger District. Project developers have asked for a temporary special use permit to begin using the material at the ski run.

Forest Service officials recently began a public comment period to seek input on the idea and, according to Recreation and Wilderness Program Manager Brian Poturalski, input has been positive so far.

"All have been extremely positive," Poturalski said. "Most have come vie e-mail, one by phone, but 100 percent have been positive and think it's a wonderful idea."

He said a final decision may come as soon as this week. Powderpak, he added, has a number of applications; though this is the first time he has seen the material used on a tubing run.

"I've not seen it in this application, most of the applications that I've seen is for the loading and unloading ramps and ski lifts. It's used in that regard fairly widespread," Poturalski said.

Should the project find approval with the Forest Service, Public Information Officer Jackie Denk said the permit would be issued for a single year.

"If there are no major issues, the permit will be issued and it is not to exceed one year. It's kind of like a one year trial period, where we see how it works," Denk said. "If it looks as though they want to make it a permanent part of what they offer then we would go through the environmental analysis at that point,"

"We are looking to get as much feedback as we can. It's a really wonderful thing," Lomaga said. "It's not a permanent fixture on the mountain. It's something that we would put down and not in any way affect the runs."

Lomaga added that the material would help add a new level of entertainment in Williams, despite short winters in the area.

"It is a recycled material and we are proposing to put that on the sledding hill right now," she said. "It's really a fascinating product. The kids can actually go out there and tube on it. It's a great thing. It would enable us to provide a lot of fun entertainment whether we have snow or not - which we hope we have lots and lots of snow."

Lomaga said the lodge will open Nov. 9, though a decision on the Powderpak has yet to be made.

"We're planning on opening Nov. 9, snow or not, the restaurant will be open," Lomaga said. "Depending on snow, we will be up and ready to go. Things are looking really, really good. We're also going to be looking at it to do a dinner and that the restaurant would be open year-round. The runs have been all cleaned, the day lodge has been refurbished and we're very excited to get everybody up there to see it."