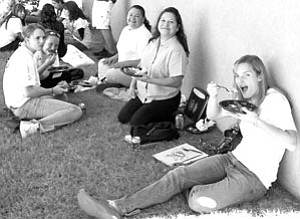 Students Against Destructive Decisions (SADD), formerly known as the Students Against Drunk Driving organization, will soon have a presence in the Williams area thanks to the efforts of a number of individuals within the community. SADD is a student-led organization that helps promote awareness in regards to substance abuse and other harmful decisions made by young people.

"We are forming a chapter of SADD," said Williams High School teacher Angel Atencio. "Patricia Helgeson with the Williams Alliance spearheaded it. She acquired the grant to actually put it together and put together media campaigns and then to also get people involved, teachers involved (and) co-sponsors, myself as one of them, (Mike) Fleischman being the other, and also work with the Williams Alliance to put together a committee that can help be a support group, but also be a resource for students to go to."

Recruitment for the group will kick off in roughly three weeks. Once that is accomplished, according to Atencio, the Phoenix chapter would step in to help out in terms of events and other promotions, as well as helping to develop student resources.

"We attended a kick-off conference for all of the state of Arizona. It was held at the Mesa Convention Center. Schools from all over attended," Atencio said. "Because Williams was new to it, we had three students go. That was Ellie, Chardelle and Tiffany, representing Williams High School. It basically talked about all of the statistics that students, ages 12-18, are involved in with regards to negative activity, everything from gambling to drinking to drugs to unprotected sex and those types of things."

SADD and the Arizona Governor's Office are currently working on a new program for the state, which will officially kick-off in Phoenix Oct. 29. The new campaign is called Draw the Line - a program that focuses on the influences adult behavior can have on youth.

"Basically it's a push to ask parents and young adults to draw the line and get involved to help the youth make better choices and then, ultimately, act as a prevention method as opposed to encouragement," Atencio said. "We are taking the SADD chapter, the three students we currently have formed, and we are taking both media classes, my print media and then the digital media. They're going to be involved because it's an actual press conference and that will introduce the formalities of what a press conference is to both classes.

"We do have a student that is not yet part of SADD, but she volunteered to tell her story," Atencio said. "She is what we call a 'poster child' of someone who used to make destructive decisions and now she chooses not to. Now she chooses to be more of a positive student and more of a positive person, as opposed to drinking on weekends, partying in the woods and those types of things."

Atencio said the idea for a chapter of SADD has received "tremendous" support in Williams.

"There are a lot of members of the community that are extremely excited about Williams forming a SADD chapter, but also that we have a student that has the courage to go in front of thousands and even millions, because this might go nationwide, of people to tell her story and we hope that, because she had the courage to step forward, that there will be other students that will say, 'Oh, she did it and she had the courage to say no, so can I.' This specific student, she's a very well known face in our community. A lot of people know her. SADD is a community that other students can be a part of and not feel judged. That's actually one of the promotions for SADD is (that) you can be a part of us and we won't judge. We're not going to say, 'You're a trouble maker so now you need to change your ways.' That's not what this is about. It's about other students having a relation to other students, having that actual support from someone who is you're age.

"I really hope to find parental involvement. I know that the Williams Alliance is a tremendous support for SADD. They spearheaded it; they began it (and) Patricia chose to act as a co-advisor. We hope that we can first spread it through here in our halls and then out into the street," Atencio said.

Anyone interested in taking part in the local SADD chapter can call Atencio or Fleishman at WHS at (928) 635-4474.

Helgeson said she wanted to bring SADD to Williams after she attended a conference in Washington D.C.

"Part of my charge was to establish youth efforts, that we could incorporate into various activities throughout the community -prevention, specifically, would be a focus. When I say 'we' I am talking about the Williams Alliance and the Strategic Prevention Framework State Incentive Grant. Our grant is one of 11 grants that were awarded in Arizona," said Helgeson, youth specialist with the alliance. "Last May I started working with some of the high school students that are now officers. When the school year started, that's when I asked them to take on the two lead roles."

"There's the Williams Alliance, part of that is the Access and Tolerance Committee, which I am on," said Masson. "There's an attitude of access and tolerance in the community and we're trying to curb some of those things to where there's less tolerance to underage drinking and the kids don't have as much access to the alcohol."