Native bullfighters hope to make it big
No Bull! ‘Protection bullfighters’ get an edge up in rodeo 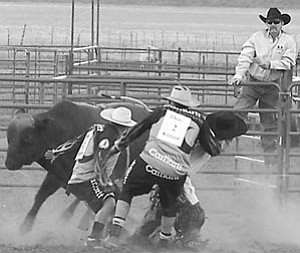 MORMON LAKE - Rodeo clowns. It's a term we've all heard before. We all envision rodeo clowns as those guys at rodeos dressed in funny, brightly-colored outfits and painted faces sitting out in a barrel in front of arena crowds and letting mean-tempered bulls have their way with them all in the name of entertainment. While rodeo clowns do have their well-deserved place in rodeo history, there is another group eager to prove themselves worthy of the same recognition and respect.

Hoping to supplant the term "rodeo clown" are men of fortitude, men armed with a unique inner courage reserved for those willing to risk life and limb with a defiance unparalleled in any other sport. You wouldn't dare call these men "clowns" - they are called "protection bullfighters."

The term may be somewhat confusing because the people involved don't actually fight the bulls, they protect the riders. The term comes from the fact that protection bullfighting is the only sport in the world where the competition is actually based on saving lives. In short, protection bullfighters work competitively in teams of two and assist bull riders to safety once they have dismounted or have "wrecked" (been bucked off). Before the chute opens, bullfighters position themselves within the arena and rely upon their athleticism, timing and quick thinking to anticipate the bull's actions. Their ultimate goal is to help the bull rider get to safety as quickly as possible after a dismount or wreck. Teamwork is crucial. One wrong move or misread could result in serious injury or death for the bull rider or the bullfighters.

As luck would have it, the Ty Jones Bullfighting School and Two Bulls Academy was held Sept. 15-16 at Mormon Lake. It featured several aspiring Native American protection bullfighters eager to showcase their talents in the hopes of gaining more recognition and joining the national tour as professionals.

Jones stated, "The opportunity in professional bullfighting ... has increased with such a growth lately that it's difficult to measure. The unfortunate thing is that most do not know how to move to the next level or where to start."

"I see a lot of young Natives that have desires and talents to do this, so they'll grab a rope and some equipment and pop in on an event somewhere without any fundamentals or proper training. Without the basics, it can be a long, disappointing road," he added.

Concurring with this statement was Brandon Lincoln (Diné/Hopi) from Second Mesa.

"I used to ride bulls, but I sucked at it, so I moved on to bullfighting. I found it easier to fight bulls than to ride them."

Lincoln added that he had been fighting bulls for several years, finding inspiration in fellow Native bullfighter and teammate, Kevin James.

James (Diné), from White Valley, got his start in bullfighting in a practice pen and shared similar sentiments as Lincoln, sheepishly admitting, "I tried to ride bulls, but found it was a lot safer being chased by them than being on their backs."

James has been training as a protection bullfighter for just over five years and has teamed with Lincoln on several occasions.

James stated that most of his travels thus far have been only in the southwest, to places such as Utah, New Mexico, Colorado, Southern California and Arizona.

The "veteran" of this Native trio with 12 years of training as both a bull rider and bullfighter is Julian "Jube" Baker (Southern Ute) from Ignacio, Colo. Initially starting off as a bull rider, Baker saw the need for more "good bullfighters," so he easily made the transition.

"I want to show other Native people in Indian Country that this can be done if you really want it bad enough," he said.

All three credited the Ty Jones Bullfighting School as being beneficial towards their ultimate career goal of making the national bull riding/bullfighting circuit, such as the newly founded Professional Bullfighters Tour in Duncan, Okla.

Baker stated emphatically, "As Native people, there are chances out there and if you get one, take it. There are people out there looking for us and [who] are willing to help us."

James stated the schools such as the Ty Jones Bullfighting School helps to prepare bullfighters for the actual tour events and gives a good indication of what they are being judged on. Jones wholeheartedly agreed.

"This is where I feel a good ... bullfighting academy is valuable. Here, you have a starting point ... as well as the opportunity to reach the next level," he said.

Baker added, "Jim McClain and Allen Nelson (of the Professional Bull Fighters Tour) told me to come [to the Ty Jones school], so I did, and I'm glad I did."

• Turning bulls back - the ability to engage the bull to make him turn and spin (as needed) to gain the rider more points;

• Dismount positioning - basically, to be at the right place at the right time following dismount. Bullfighters must be able to react to the bull's action to give the bull rider the best possible opportunity to escape without serious injury;

• Hooking prevention - Preventing the bull from "hooking" (horning) the bull rider in case of a wreck. Sometimes, the bullfighters engage in the wreck and distract the bull to give the bull rider a chance to escape with minimal injury.

• Hang-ups - When the bull rider gets hung up in the rope, the bullfighters will work as a team, with one bullfighter getting the bull's head under control while the other works to free the bull rider's hand from the rope.

• Aggressiveness - the aggressiveness of the bullfighters to the situation taking place during and after the ride; and,

• Showmanship - the ability to take the situation and make it entertaining to the audience.

With "showmanship" at the bottom of the list, it is clear that the focus of professional bullfighting has shifted. Instead, each technical maneuver that the bullfighters make - including showmanship - has a specific point value with a maximum of 18 points per judge. While judging bullfighters sounds relatively simple in theory, it is very different in reality.

"I've ridden bulls professionally for about 10 years and I would never get on a bull without a bullfighter. And I know I would not be alive now without them, and that's why I got involved with the [bullfighting] academy. Bucking bulls have become more athletic and as a result, the bullfighters [have] had to become more athletic ... Bullfighters have become [more of] an asset than a liability for rodeos," stated Jones.

Baker, James and Lincoln each took their respective turns at showing the judges what they had, never once forgetting their purpose. Each team was impressive. At one point, Lincoln wowed spectators after saving a bull rider and having the bull turn around and toss him up in the air. Lincoln smiled proudly as he took it in stride, picked up his hat, acknowledged his partner and the crowd and undoubtedly won a few points for showmanship. In the end, it was the team of Lincoln and James who won the grand prize of a trip to Fort Worth, Texas to compete in a professional bullfighting event. They won with a total of 92 points. Most professional bullfighters compete for points and money.

Although Baker's team didn't get the grand prize, he was still thrilled about being a part of the Ty Jone's school and was equally enthusiastic about competing professionally. After being part of the Colorado State High School Rodeo for three years and working with the national "Little Britches" rodeo, Baker is eager to keep his dream alive and compete as one of the first professional Native protection bullfighters.

James summed it up by sharing some advice that he was given as an up-and-comer: "Get in front of as many bulls as you can, as often as you can."

"Kevin [James] and Brandon [Lincoln] took advantage of the Academy, worked hard, and with some discipline, now have a ticket to Fort Worth to compete with the best and to be on the Professional Bullfighters Tour."