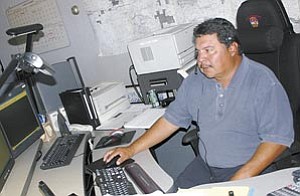 Sam Espinoza, director of support services for the Williams Police Department, works dispatch at the police department. The new tip line will offer callers the chance to remain anonymous.

There could be any number of reasons behind a phone call to the police department in Williams. Aside from an emergency, callers may wish to offer help to local law enforcement officials, but may be hesitant to do so as they may not wish to be identified. Some callers are fearful for that very reason, as well as other reasons, said Williams Police Chief Herman Nixon.

That is expected to change thanks to a new anonymous tip line installed recently at the Williams Police Department. Individuals who phone the line can leave an anonymous tip on an answering machine, located in Nixon's office. Nixon himself plays back the messages each day. The tip line can be called any time at (928) 635-5992.

"We have 12 officers on the street and we can't cover everything. We're trying to get the community involved, with the police department, with bringing us information. They're really the eyes and ears of this police department," Nixon said. "Part of the problem we found out was that a lot of people don't want to call the police department, because they're afraid that people will recognize their voice and/or they have to leave their name."

The tip line, Nixon added, will alleviate much of the fear of identification than can come with a regular call to the WPD offices.

"A lot of people know crimes are going on, or drug activity and they wouldn't want to call us," Nixon said. "I've had a lot of people talk to me in person (and) tell me they know about things that are going on, but part of the things that they were telling me was that they didn't want to call the police department because our dispatchers do ask for names and call back numbers."

The phone number, designed like a silent witness line, will allow the callers to remain anonymous, according to Nixon. There are no rewards for information given on the tip line.

"What I decided to do was set up a line, a silent witness line. Really it's an information tip line. The number is 635-5992 and people can call that number, it will not be answered by a live person. It goes directly to a voice mail, you'll hear a short little message, and then leave a message. I will check those every day," Nixon said. "You can leave information on suspicious drug activities, crimes that occur, crimes that may occur, anything that concerns you that you don't want to leave your name about, you can leave it on this machine. There's no way to trace it. I don't have caller ID. We're going to look at every call we get."

The silent witness tip line is secured in Nixon's office and not readily available to other personnel in the department.

"Every morning I will check that answering machine. I am hoping people will start calling in and giving us information. We know there are things going on in this city and most of the time we only have a few officers on. We can't cover the whole city. If they can let us know what is going on then we can go check into those situations."

Nixon said he implemented the new line in an effort to make callers feel more comfortable.

"We're a small community (and) a lot of people have grown up here," Nixon said. "Their neighbor may be involved in drug activity and they don't want to be the one to call in on them. They don't agree with it and it's affecting their neighborhood and the kids playing outside and everything else, but they're afraid of retaliation. We want to make it to where people can call in here and not be afraid. I think this is going to be a good program. I'm hoping that people will start calling in and leaving information for us."