A coin toss decides it all for the Lady Vikes 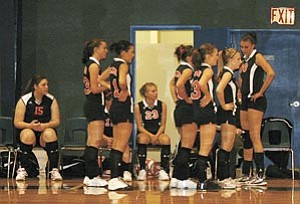 The Lady Vikings will go on to play the fourth seed pick later this month after a win and a loss against Fredonia Oct. 13. The girls will take on Bagdad tomorow at 4 and 5 p.m. at WHS.

The Lady Vikes took on Northland Prep Oct. 2 on Northland's home turf, winning the match in three games. Both the junior varsity (JV) and the varsity girls played in the away match. The JV girls went all three games in their best of three matches, though they managed to go home with the win by the time it was all said and done. The JV won the first game with a final score of Williams 25, Northland Prep 18. They didn't manage a win in the second match however, with Northland Prep winning 25-18. It was the only win for them however, as the JV team came back to take the game with a second win for the day. Final score for the third match was Williams 20, Northland Prep 18.

It was on to Fredonia for the girls following their Northland victory Oct. 13. The varsity girls played two away matches against the tough Fredonia team, though things didn't look good for the Williams girls at the start of play. Williams lost the first match at the end of five matches. Final scores for the games were Williams 25-18, Fredonia 25-21, Williams 26-24, Fredonia 25-20 and Fredonia 15-7.

The loss didn't stop the girls from gathering their strength for a quick upset in the second match. Williams came away from the best of five matches with three quick wins against Fredonia. Final scores for the second game were Williams 25-15, Williams 25-20 and Williams 25-20.

"We do a lot of conditioning during practice and I think that helped us during that double match," Fredrickson said.

The JV girls also took on Fredonia during their away trip Oct. 13, taking their best of three matches in a two-game sweep. Final scores for the JV girls were Williams 25-15 and Williams 25-14.

The loss of the first varsity match put Williams in a three-way tie for the region, one that was ultimately decided by chance - a coin toss thrown by the athletic directors of the teams.

"We went to Fredonia, (they're) on our side of the conference," said Fredrickson. "We had to officially go in to play in our region. We had to win both matches - the varsity did. If we split the matches it was a three-way tie between us, Ash Fork and Fredonia. The athletic directors did a coin toss and we were lucky enough with the coin toss that we'll go in first place to the regionals. It's great, because I think there's going to be a three-way tie on the other side of our conference too. We'll play the number four seed on the other side of the conference."

Conference games are scheduled to begin Oct. 26 for a two-day match at Mogollon. Meanwhile, the Lady Vikes took on Valle Oct. 16 and will play an unscheduled match against Bagdad at Williams High School. Games are slated to begin at 4 and 5 p.m.

"At regionals the top four teams from either side of the conference play each other, one versus four, two versus three, that type of thing, so we'll play the fourth place seed. If we win that we go to state. We have to win that first one in order to go to state," said Fredrickson.

State games are tentatively scheduled to begin the first weekend in November.