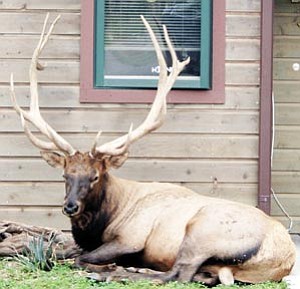 Though they can seem quite tame, this time of year due to a combination of frustration and hormones, bull elk can be unpredictable, aggressive and dangerous.

Though rutting season is winding down, over the next few weeks bull elk can still be prone to dangerously unreasonable behavior toward anything invading their space.

According to wildlife biologist Eric York, while elk are most territorial when overseeing a herd of cows - a job that most have finished - females don't have to be involved. In fact, the younger males tend to come out of the season harboring some resentment over the treatment they've gotten from older bulls. Many are also feeling harassed and irritable after being pushed into the park by hunters.

"The young bulls who have no cows have pent-up aggression," he said. "They don't even need to have cows. They've been beaten up and they're just looking for somebody smaller."

Though attacks are almost non-existent, there was one last fall in which a jogger was butted to the ground and suffered a broken leg after unexpectedly coming across a bull in his path.

The best way to avoid trouble is to maintain as much distance as possible. While it's possible to stumble into a bull's space without realizing it, York said bigger problems stem from a lack of respect.

"It's rare that you run into the wrong elk at the wrong time. It's when you try to take photos that you have plenty of opportunity to get too close," he said. "The easiest thing is to use common sense. It's a large animal weighing 600-800

pounds and even if it is a good picture it's probably not worth it."

If you do get too close accidentally, he recommends backing away as turning and running could trigger a charge. You should also keep trees between you and him if possible.

"The bigger the tree, the better, obviously," he said.

People should also apply the principle of distance to bighorn sheep, which are also aggressively protective of their harem, and deer, though they tend to be less jealous than males who collect herds.