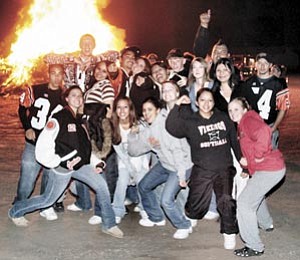 Students enjoy the senior bonfire held Sept. 27 at the Bob Dean Rodeo Grounds. No major problems were reported as a result of last week’s festivities, according to Williams authorities.

This year's homecoming celebration was a one to celebrate in Williams as officials with the Williams Police Department reported no major incidents in the area. Homecoming week is typically a busy one for police across the nation. Outside of "eggings" and "toilet papering," Williams Police Chief Herman Nixon said youth in Williams behaved well during Williams' numerous homecoming events, which included a parade Sept. 28, a homecomng volleyball game, a homecoming football game and the annual homecoming dance held Sept. 28 at Williams High School (WHS). A senior bonfire was held Sept. 27 at the Bob Dean Rodeo Grounds as well.

Nixon said there were "no big issues" at any of the events.

He added that homecoming week is typically a time when the police are on extra alert.

"We had the bonfire. It never fails that after bonfire they like to go out," Nixon said. "Our big concern is that the kids drive around. We had extra officers on. We stayed on top of them. I told all the kids they had to go home at 10 o'clock and they all followed through with that. They didn't cause a lot problems."

WHS teacher and this year's homecoming coordinator Kristi Fredrickson said homecoming went well overall, though the two WHS sports teams, the Williams Vikings and the Lady Vikes, did not fare well during their homecoming games against Joseph City.

During the Vikings football half-time show, Seniors Enzo Clapper and Kassie Pettit were crowned homecoming king and queen as well.

"There was a lot of class spirit, a lot of participation in the dress up days and everything," Fredrickson said. "Most of the classes had like close to half their kids dress up every day, so that was kind of neat - to have that many kids dressed up."

She said the parades were also of particular merit this year, including the winning float designed by the junior class with a Las Vegas theme.

"They always seem like they come together in the end," Fredrickson said of the floats.

Outside judges vote on the entries on the homecoming parade. While the juniors took first place for their entry, the WHS senior class came in second, with sophomores taking third place and freshmen taking fourth place. Out of the total week's worth of homecoming competitions, Fredrickson added, seniors took first place, with juniors second, sophomores third and freshmen fourth.

The high school boys went on to play volleyball for homecoming as well, Fredrickson said.

"The dance was really nice, well attended," she added. "The bonfire was good. It was bigger than last year."

She said the only issue was that some students took class rivalry a little too far when it came to posting signs and or graduation dates, such as the date "2011" for the freshman class.

"Some of the classes got a little bit too competitive in terms of the signs. There was some shoe polish and stuff," Fredrickson said. "I know there were some eggs on the sidewalk one morning. In general it was pretty mellow."