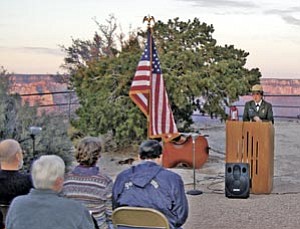 Tests from the Centers for Disease Control and Prevention (CDC) have confirmed plague as the cause of death of 37-year-old wildlife biologist Eric York.

York was found dead in his home in the park on Friday, Nov. 2. The National Park Service announced that plague was the probable cause of his death based on preliminary laboratory tests conducted by the Arizona Department of Health Services (ADHS) and the CDC.

Additional CDC tests also determined that York was infected with the same strain of plague that infected a mountain lion he'd autopsied a week before his death.

These tests support other evidence that the mountain lion was the source of the disease.

Plague is a rare, but sometimes fatal, disease caused by the bacterium Yersinia pestis. It is primarily a disease of animals, but it can be transmitted to humans through the bites of rodent fleas or by direct contact with infected animals.

According to the CDC, transmission of plague from person to person has not been observed in the United States since 1924.

Plague is considered endemic in northern Arizona at elevations above 4,500 feet. While an average of one or two human cases of plague are reported each year in Arizona, there were no human cases reported from 2001 through 2006 in the state. Increased plague activity in Arizona was reported in 2007.

According to public health officials, one human case, who survived, was reported in Apache County.

Also, in two separate Flagstaff neighborhoods, prairie dog colony die-offs were confirmed to be from plague, and a domestic pet cat from north of Prescott was also documented as being infected with plague.

York had direct contact with both wild rodents and mountain lions, which put him at a higher risk for plague than other park staff and the general public. Persons living, working or visiting areas where plague is known to be present can take the following precautions to reduce their risk of exposure:

• Do not handle sick or dead animals.

• Avoid exposure to rodent burrows and fleas and wild animals.

• Use insect repellant when visiting or working in areas where plague might be active or rodents might be present.

• Domestic cats are susceptible to plague. Cat owners should take their ill cats to a veterinarian for evaluation.

The NPS is collaborating with its public health partners to assess the risk for plague and other zoonotic diseases at the park.

Public health officials from the NPS, the CDC, ADHS and the Coconino County Health Department have all been instrumental in responding to this incident.

For more information on plague and prevention, visit the CDC Web site at http://www.cdc.gov/ncidod/dvbid/plague/index.htm.