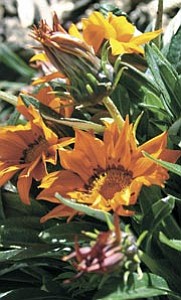 Flowers in Williams remain well into November thanks to warmer than average conditions in the area. Meteorologist George Howard attributed the conditions to La Nina weather patterns.

The air has seemed a little warmer than normal for November. Flowers can even be found in some areas, though they are finally beginning to show signs of frost. Other sure signs include individuals walking the streets in shorts and T-shirts and a number of mornings where drivers find they do not have to scrape their windows before heading to work.

George Howard, warning coordination meteorologist, said the area might be experiencing the effects of La Nina. Howard works for the Bellemont National Weather Service - a part of the National Oceanic and Atmospheric Administration.

"There's a reason that we know of that's causing this decided dryness," Howard said, citing La Nino as an example of a weather pattern that can bring moisture to an area. "What we're seeing right now is its counterpart, La Nina," Howard said. "We have cooler than average ocean temperatures over the equatorial regions of the Pacific. Indirectly what happens is that influences pressure patterns over the Pacific.

"It has been a little bit of an odd November so far. Some of those overnight low temperatures have come from a lack of cloud cover," Howard said, adding that warmer soil conditions have also contributed to the fair weather.

La Nina, he said, is to blame for pushing a number of storms, or even cloud cover and colder conditions, further north than normal. The Pacific Northwest and British Columbia may end up seeing a lot of the weather that Arizona and surrounding states would normally expect, he added.

"We're left wanting for precipitation," Howard said, adding that the La Nina pattern is expected to continue through March. "The last time that we had La Nina on the order of this strength was about seven and a half years ago back in 2000. There have been other falls and winters where we had less than average conditions."

Howard said that temperatures have not been record-setting ones, despite the warmer weather.

"We wouldn't say unusually warm, we would say above average. We haven't been setting a lot of high temperature records across the region," Howard said. "In fact, in a few locations we've set a couple records for the lowest warm temperatures."

While there is no snow on the horizon as of yet, Howard said Williams fared quite well when it came to precipitation in the summer months. Williams received a total of 13.22 inches of rainfall this summer thanks to a generous monsoon season. The average for a summer season, from July to Sept., is typically 7.8, according to Howard.

"Williams has been rather fortunate," Howard said. "You had, basically, almost five and a half inches (of) additional rain than what you would have normally. Williams fared really well when it came to precipitation. Things are a different story at this point. It's normal for us to have sort of a tapering off period in our fall precipitation."

The average expected rainfall in October, he said, is roughly 1.78 inches. This October, however, Williams received only four-tenths of an inch.

"When we're looking at La Nina conditions like we are now, we're looking at nine chances in 10 that we'll be dryer than average," Howard said. "This doesn't tell us how much dryer, but it does give us an indication of what to expect."