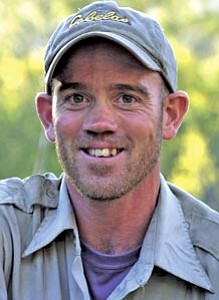 Eric York couldn't have known that his life would be so short, but he lived it as if he did.

It was the impact of that life, overstuffed with purpose and passion and lived on his terms, that friends, family and colleagues recalled as they gathered for a sunset memorial service at Yaki Point on Thursday, Nov. 15.

York, 37, a wildlife biologist, died Nov. 2, of plague, which he contracted while performing a necropsy a week earlier on a mountain lion, one of several he had radio-collared and tracked.

"It's hard for all of us to talk and think about Eric in the past and it's always hard to speak about someone whose life ended so prematurely," said Park Superintendent Steve Martin. "But I think it's important that we have this celebration. We have this remembrance. That we carry forward together with the passions that we all share."

He was joined in his remarks by National Park Service Director Mary Bomar who changed her plans to attend; Lyle Laverty, Assistant Secretary, Fish Wildlife and Parks, Department of the Interior; colleague Elaine Leslie; interpretive ranger Lori Rome; Zara McDonald of the Felidae Conservation Fund and Mollie Hogan of The Nature of Wildworks. NPS' Honor Guard was also present.

Family members of York's, including his father, Tony, also traveled from western Massachusetts to attend.

Leslie remembered her colleague as "a biologist's biologist."

"If you couldn't be Eric, at the very least you wanted to hang out with Eric in the field."

Rome spoke as someone who had.

"One of the best days of my Park Service career I owe to Eric," she said. "I was with good people and in the Canyon and I looked into the big blue eyes of a mountain lion cub. Eric gave people like me a chance to connect to the resource during these kinds of experiences."

Leslie said that when York first came to the park two years ago, she asked him what he needed to do his job. What he said he didn't need - a desk, an office and a phone - said as much about him as his needs - a rugged truck, unlimited gas, a new pair of boots every four months and continued funding.

"Eric was much like the lions he stalked," she said. "To catch a glimpse of the elusive Eric, you needed to be up at dawn when he came in and out of the office to gather up his trusty charged radio, dart gun or other tools of the trade. We often teased Eric that we were going to set a snare and trap him once a week in order to get a project update."

When he did provide updates, she said, they were thorough, detailing the progress of every lion in the program, including the three kittens they'd found last summer that York viewed with the pride of a father. He identified each of his charges with a "P," for "puma" and their number. He signed himself in the e-mail as "P-E."

"He liked having mountain lions as friends," noted Hogan.

Leslie said that another charactaristic feature on York's e-mail was a quote by Thomas Henry Huxley that he sometimes added to his signature: "Every great advance in natural knowledge has involved the absolute rejection of authority."

York was considered a leading expert in the field of big cats, having tracked them throughout the southwest, as well as in Nepal, Chile and Pakistan. He had recently been accepted as the lead researcher on a project to track the jaguar, the most endangered of North America's most secretive predators.

"He was truly a unique soul," said McDonald who had worked with York researching lions in the Santa Monica Mountains. "He had a humble and understated nature and a gift of comfortably moving in the tribes of nature's creatures. We've lost a true hero of wildlife conservation."

Though York, who was a Thoreau enthusiast, considered this his "Walden of the west," he maintained his attachment to his New England roots, wearing on his wrist a compass that always pointed northeast. Tracking animals near some sewage ponds, he commented, "It's not Walden, but it'll do."

Calling him "the kind of person who's tailor-made to work for the National Park Service," Martin urged the gathering to find solace in their memories of York's example.

"What we all say and do now will eventually be lost to time that passes but what will not be lost is the memories that will carry forward of Eric and how he lived his life," Martin said. "We are much better for having Eric in our lives and the best tribute to him will be if we can brighten our lives with some of the passion he exhibited so effortlessly."

"We do not do these jobs for glory," she said. "There is little fame in the Park Service career. We certainly don't do it for the money. We do it because we believe we can do something good in the world. And I believe that's how Eric felt. Despite the sadness I hope that there is also joy, joy in knowing that the work Eric did mattered to us. It mattered to the parks and it mattered to Americans."

You can make donations in York's name to one of the following non-profits: