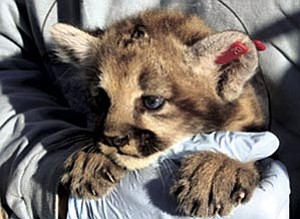 In one of his last official duties before his death, wildlife biologist Eric York reported some sad news to his boss, Science Center Director Martha Hahn. Because of the unexplained death of their mother, three kittens that researchers tagged last summer were probably dead as well.

"Eric sent me an e-mail," said Hahn. "He presumed they were dead and had probably starved."

The lioness carrying the plague was one of nine radio-collared animals being tracked in the park. By following her movements, researchers found her den and last July fitted her three cubs with identifying ear tags, hoping to further their understanding of how young lions transition to independence.

In the press release issued by the Park Service, York explained the purpose for the research:

"Grand Canyon National Park provides important habitat and prey for mountain lions in all areas of the park including sites frequented by people," he said. "By understanding mountain lion movements, population dynamics and habits, biologists can make efforts to limit the potential negative interactions between lions and humans. This data will be utilized to inform and educate visitors on how to safely share the Grand Canyon with mountain lions."

However, the same technology used to track the mother also informed biologists that she was no longer on the move.

"It gives a certain signal if it's moving and a different one if it's not moving," Hahn said. "That's what clued him in."

Since research began in 2003, 16 lions have been trapped and fitted with radio collars.

Of those, two were killed by cars in the park, two were legally hunted, one collar failed and one is believed to have fallen off.

For more on mountain lion research in the park, visit http://www.nps.gov/grca/naturescience/200710mtlionkit.htm.