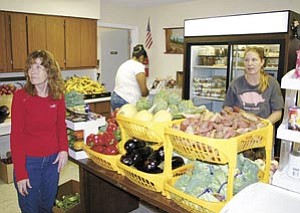 Volunteers at the Williams Food Bank, pictured above, prepare to open their doors Nov. 9. The group will begin handing out their Thanksgiving food boxes today. Fresh vegetables, pictured below, await individuals at the food bank as well as a number of other assorted food items.

Beginning today, organizers are beginning the four-day task of delivering food boxes to individuals in the Williams area. Food boxes will contain a number of food items, including one turkey or two Cornish hens, stuffing mix, mashed potatoes, sweet potatoes, marshmallows, apple juice and a long list of other items. Non-food items, such as dish liquid, paper towels and other items, are also included in the boxes. There are currently 165 families on the list for Thanksgiving boxes in the area. A second distribution is also scheduled for the Christmas holiday, including toys and a visit from Santa Claus.

"The town has pulled through in supporting us. The local restaurants and organizations have been very generous. They have all pitched in their part to help us pull it together," said Guy Mikkelsen, manager for the Foundation of Senior Living's Williams location.

Families sign up for the Thanksgiving food boxes and provide food bank officials with a name, physical address and phone number. Qualifying families are given a ticket with a date of when their box will arrive. Food Bank volunteers deliver the boxes over a four-day period, giving out anywhere from 30 to 40 boxes each day.

"The Foundation for Senior Living is a non-profit Catholic charity of Phoenix that had these apartments for the last 30 years for low-income elderly," Mikkelsen said.

He himself has been manager of the facility for the last 15 years.

"We would bring fresh bread and bakery goods to the seniors that lived here from the local food banks," he said. "I would go volunteer, bring back sweets and stuff. About three years ago, several of them all kind of closed down at once. Being a 501(c)3, we had the relationship with the stores already, because I had been volunteering for so long, and have the space here and so we started the food bank."

The food bank has been in operation for roughly three years.

"I took it on as one of the foundation's programs, community action programs. We've been growing," Mikkelsen said. "The first year we had a van donated by the Hensley Employee Foundation, they're the Budweiser distributing company out of Phoenix. We've got a commercial refrigerator that was donated by the Holiday Inn and the different Safeway stores, our local store as well as ones in Flagstaff, have given us shelving they're no longer using that we can use to set up our grocery store format."

"There's three Safeway (stores), two in Flagstaff and our local Safeway, and also the Basha's that give us fresh food every Friday morning and then we also get warehouse goods from Northern Arizona Food Bank and Care and Share Food Bank, which is now Saint Mary's Alliance. We're semi-monthly, twice a month," Mikkelsen said, adding that hours for the operation run between 1 and 4 p.m. Fridays.

Families are allowed into the bank two at a time, Mikkelsen said. The food bank plans for roughly 100 families for each week the bank is open.

"A lot of what we're doing is trying to save waste and the large quantity of waste that goes on in society. There's reasons why stuff can't be sold in the store, but it doesn't mean it's bad and reducing that waste and getting it to people is really going to help the whole economy," Mikkelsen said.

"When we first started our food bank, we actually opened the door and we just let people in the room. We have grown so much that there's way too many people to do that now," said Angie Mikkelsen, program coordinator for the Williams Food Bank.

"While they're waiting on the patio we provide them drinks and snacks. They have a cooler out there with cold drinks and they have coffee and tea and apple cider and hot chocolate they can drink outside," she said. "Then we invite them in, two at a time and they walk through the room. There are volunteers stationed along the way. The volunteers help them out with what items they're allowed to have. We are all volunteers here."

Determining the amount of specific items that each shopper is allotted, she added, depends on how much of each item is available.

"If we have 500 of a certain item, then they might get three or four of them. If we only had 50 of them, then we might put another item with that and they might get a choice of this or that," Mikkelsen said, adding that volunteers at the food bank typically see a lot of people on fixed incomes or who have a high number of medical bills.

Supplies obtained at the Food Bank are designed to help families create a well balanced diet, supplemented by other foods they purchase at the store.

"A lot of the items that we get, like the red peppers, those are like $1.69 a piece sometimes at the grocery store," she said. "These people will not buy the red pepper because they can't afford to spend that kind of money, but when they get a red pepper here they are excited. We would not be able to do all the things that we do here without the support of the community. They help a lot. There is continued support from many businesses here."