Polar party
Kids flock to the rails to visit with Santa 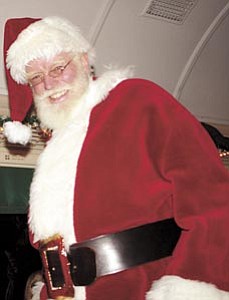 The one and only Santa Claus smiles to passengers after boarding the Polar Express™ train.

The tracks of the Grand Canyon Railway rumbled beneath their feet as large handfuls of families traveled through a magical portal to a land far away - a land filled with elves, candy canes and reindeer. Children plastered their faces to the windows on the train ride, eagerly awaiting their first glimpse of twinkling Christmas lights. Many wore their pajamas on the trip, ranging from fluffy zebra robes to more conservative plaid sweat pants and T-shirts. Despite the variation in dress style, everyone took part in the hot cocoa and oversized chocolate chip cookies. Anticipation for Christmas charged the train car like a burst of yuletide electricity.

The Polar Express chugged into town Nov. 8 for its first official trip to the North Pole. A preliminary run was conducted one week earlier for friends and families of Grand Canyon Railway employees and, as it is with every train ride, magic floated in the eyes of each and every child. The Polar Express will conduct regular trips to Santa's hometown throughout November and December. Special runs are also planned for the first two weekends in January.

Railway "chef" Ellie Krombeen entertained holiday revelers in one of the passenger cars during the Nov. 8 trip. For Krombeen, it was her first time manning the train to the North Pole.

"This is my very first day. It's really exciting," Krombeen said, adding that one of her favorite parts of the job is the look of joy on the childrens' faces.

"It's so much fun to see their faces. I think it's going to be a very good year," she said.

The Polar Express, from the children's book by Chris Van Allsburg, offers hot chocolate and cookies to passengers on the holiday journey. Excerpts from the book are also read as children, and even a number of parents, eagerly await their chance to arrive at the famed North Pole. None other than Santa Claus himself boards the train as well, with a special gift for every traveler. This year marks the seventh year for the express.

Ericia Carlson brought her daughter Andrea, 3, on the Nov. 8 Polar trip. This year marks Andrea's third consecutive ride to the North Pole. Carlson said that seeing the children's eyes "light up" is her favorite part of the excursion.

"She's loving it," Carlson said. "There's nothing like the spirit of Christmas for them."

A number of charities were granted the chance to ride to the North Pole during the 2007 kickoff trip Nov. 8 for their 8 p.m. run. Last year a number of charities took part in the festivities, including the Flagstaff Toys for Tots organization, Big Brothers Big Sisters and a number of other non-profit organizations. All together, over 70,000 excited holiday revelers traveled on the Polar Express in 2006.

This year, organizers are asking interested individuals to bring an unwrapped, new toy with them when they come to the railway depot to donate to less fortunate children in northern Arizona.

For more information on the Polar Express, visit the Grand Canyon Railway's Web site at www.thetrain.com or call 1-800-THE-TRAIN.