Plague believed to be cause of biologist's death 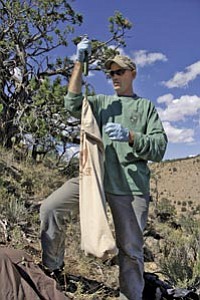 Biologist Eric York, 37, works in the field. Officials believe he died of plague contracted from a mountain lion carcass.

Preliminary lab tests indicate that pneumonic plague killed a 37-year-old wildlife biologist who was found dead in his home here on Nov. 2.

Tissue samples from the biologist, Eric York, as well as from a mountain lion carcass on which he'd performed an autopsy before becoming sick, tested positive for plague DNA, said Dr. David Wong, a medical epidemiologist on detail to the Park Service from the U.S. Public Health Service.

"We feel pretty comfortable that he got plague from the close contact with the animal," Wong said.

The mountain lion, one of several radio-collared cats in a research study on territory and migration, died in a remote area in the western part of the park.

York is believed to be the only person who handled the carcass, said Chris Smith, one of the Park Service investigators.

According to Dr. Elisabeth Lawaczeck, a state public health veterinarian, the lion's remains showed no sign of trauma that might have caused its death, leaving open the possibility that it died of plague.

Characteristic of pneumonic plague, York's illness progressed rapidly. He autopsied the mountain lion on Friday, Oct. 26, presented at the clinic with generalized flu-like symptoms on Tuesday, Oct. 30, and died the following Friday.

"Upon the moment we found Eric and knowing his background, we notified the Public Health Service as soon as possible," he said.

Public health officials recommended a seven-day regimen of precautionary antibiotic treatment for about 50 people who came within six feet of York when he was symptomatic.

According to Dr. Sandra Garrard of the Grand Canyon Clinic, most patients are taking doxycycline. Residents who develop severe cold and flu symptoms should advise their doctors that they are from an area that had a case of plague. Doctors should also know if they had any contact with a wild animal or spent time in a wilderness area.

Included in the treatment decisions, investigation and public education were health officials from the county, state, National Park Service, U.S. Public Health Service and the Centers for Disease Control. Park officials hosted two informational public meetings on Tuesday, Nov. 6, to announce that both hantavirus and plague were being eyed as possible causes of death. On Friday, they held another meeting to announce the probable cause.

"Our goal through the process is to make sure we do the most thorough investigation," Martin said. "Our other goal is to be open and answer any questions with real time information."

Deputy Superintendent of Operations Palma Wilson said that officials are confident there is not a generalized risk to the public.

"We should keep in mind that Eric, as a wildlife biologist, had direct contact with an infected animal," she said. "He was more at risk."

The investigation is also looking at ways that risk might have been lowered and could shape wildlife handling policies throughout the Park Service.

"As part of the investigation into this case, the NPS Risk Management Division will review existing safety requirements for wildlife biologists and offer recommendations for improvements to that," Smith said.

They also plan more public education for residents and visitors on the risks of handling dead animals as well as guidelines on what to do both for dead animals and live rodents that could be a reservoir for disease.

"One thing we're going to talk about a lot is education and prevention," said Wilson.