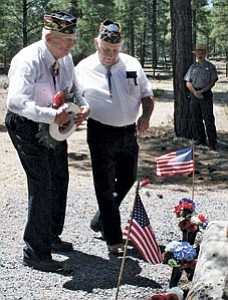 Across the nation last Sunday, public ceremonies recalled sacrifices made by veterans. Throughout the rest of the year, American Legion posts like Grand Canyon's John Ivens Post 42, honor those sacrifices both directly and through service to the community.

Between the post, its Auxiliary and Sons of the American Legion, they have nearly 190 members - "from Maine to California, from Washington state to Florida," said Ladies Auxiliary Secretary Mary Hoover.

Legion membership is open to veterans who served in any of the armed forces during certain time periods during World War I, World War II, Korea and Vietnam and during conflicts in Lebanon and Grenada, Panama and Iraq and Afghanistan. The service doesn't have to be in a war zone.

While Post 42 members have served in conflicts up to the current ones, Patton said it's the older ones who tend to be more active.

"It's a challenge," he said. "There aren't so many young veterans. They're working and raising a family. It's hard to get active."

Even members who aren't active help the post and veterans statewide since Legion membership is one way benefits are determined.

"It's a benefit to the organization, more than just to us," said Patton.

The post, chartered here in 1923, was named for Pvt. 1st Class John Ivens, who in 1918 became the first Grand Canyon soldier to die in World War I. Ivens' former employer Emery Kolb was a charter member and served as second vice commander. Former Deputy Sheriff Lyle McLean was the first commander.

Almost immediately, they started maintaining the cemetery, donating the first gate in 1928. Through the years the Legion has maintained veterans' graves, paid for repair and upkeep of the gate and finally completed it last spring in time for Memorial Day ceremonies. Since its charter, the post has led these services every year except for one during World War II.

According to Hoover, the post was also active in the park's social life, hosting functions for workers in the Civilian Conservation Corps and at an R and R camp during the war.

"One of the first things they started working toward was a community building," she said.

They played a leadership and fundraising role for the first community building in 1930 and assisted to replace it when it burned down in 1934.

In the 1980s, they started awarding scholarships and have recently added one for children of the post's members. They've also been active in promoting citizenship, teaching flag etiquette in the school and sponsoring student participation in the Legion's Boys and Girls State citizenship training programs.

Hoover said they signed on early to the state's Sponsor a Highway program.

In 1998, they became the first organization to be named to the Grand Canyon Historical Society's Hall of Fame.

The American Legion was chartered by Congress in 1919 and has about 3 million members in 15,000 posts worldwide. John Ivens Post 42 is part of Arizona District 7, which includes all of Coconino and Mohave counties and Ash Fork in Yavapai County.

They meet on the first Sunday of each month at the Quality Inn in Tusayan.