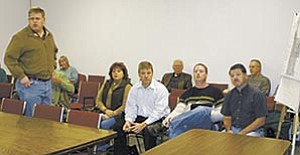 All members of the Williams Planning and Zoning Commission were present for a Nov. 1 meeting at city hall with one task on the evening's agenda - to make a decision on the Forest Canyon Estates subdivision. Commissioner Karen Peters recused herself from the proceedings, due to the fact that her residence is near the proposed development. Commissioners approved the redesigned preliminary plat during the Nov. 1 meeting. The subdivision is expected to return once again for a decision by members of the Williams City Council sometime this month.

Planning and Zoning Commissioners are not new to the proposal, as they have approved the plans once already within the last two months. The subdivision, which has been put before both the Planning and Zoning Commission and members of Williams City Council on numerous occasions over the last couple of years, returned to P and Z after it was brought to the public's attention that changes were in store for the project, changes made after its preliminary P and Z approval. Williams Vice Mayor Bernie Heimenz spearheaded the changes, which concerned access in and out of the subdivision.

Members of the P and Z Commission, who attended the Oct. 11 council meeting, objected to the changes, as they had not had a chance to review them when they approved the preliminary plans in September.

"The council came up with a surprise announcement in a breakthrough in an access road," Williams City Planner Harry Holmes told P and Z commissioners.

"Because of the change in the proposed access road, council voted to send this application back," he said.

Holmes said the only change to the proposed subdivision had to do with access. Both roads in and out of the subdivision changed as part of the new proposal put forward in the Oct. 11 council meeting and were pending an agreement with neighboring property owners.

Developer Mason Cave said the project would not move forward without an agreement with the nearby property owners that would allow a roadway through their property. Cave represents TMD Properties, owners of the proposed Forest Canyon Estates subdivision.

"We felt comfortable that we're going to be able to move forward to get access resolved," Cave said. "In addition to that the other change that we made was at the urging of some other individuals as well as the fire marshall, (who) indicated they would like to have full (roadway) access."

Cave added that negotiations are currently under way with adjoining property owners to allow access from the proposed subdivision that may alleviate concerns from homeowners in the area about traffic congestion in their neighborhoods.

"We are currently talking to them pretty regularly," Cave said. "We feel comfortable about spending money and moving forward."

Final details on the subdivision will come when the project enters the final plat stage.

The Forest Canyon Estates subdivision has gone through a number of changes recently after it's first final plat approval was denied by members of the Williams City Council earlier in the year. The subdivision, which originally specified a total of 120 lots, has been scaled back to 70 lots. The number of separate properties were reduced to allow for estate-sized lots, according to developers, with a 15,000 square foot minimum lot size. Lot size could also go as high as one acre. Forest Canyon Estates is located on 60 acres in the southwest corner of Williams.