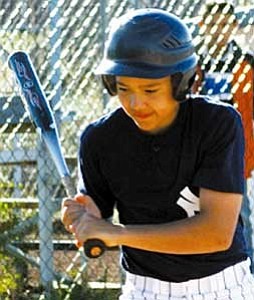 Yankee Jimmy Perkins pitched 12 strikeouts during the May 19 game against Grand Canyon and scored a home run against the Williams Dodgers May 23.

It isn't just the sun's rays warming things up in Williams. It's baseball too. An exciting season has unfolded for Williams Little League ball players, including a few tight games and good old-fashioned, well mannered rivalry between a few of the teams. Williams has been playing some excellent baseball overall, according to coaches, which earned them a few nods from other teams in the area. The Williams D-Backs, for instance, remained undefeated as of May 24.

Teams played a number of games May 19 at Cureton Park. For any given summer Saturday, spectators can expect a handful of games during Little League season. One exception however, is Memorial Day weekend. No games were played to accommodate family schedules among players, volunteers and coaches.

The A's stand with an overall record of 10 and 2 for the season, having lost two games to the undefeated Diamondbacks. Tanner Grantham coaches the D-Backs and Edgar Brown coaches the A's for the 2007 season.

Williams Yankees played Grand Canyon May 19 as well. The Yankees won the game with a final score of Yankees 12, Grand Canyon 5. Jimmy Perkins pitched for the Yankees during the game. Like Brownlee of the A's, Perkins walked away from the ball game with 12 strikeouts for the evening.

"Adrian also hit one out of the ball park for a home run," said Little League Coach Herman Nixon.

The final game of the day saw a match-up between Seligman and the Williams Dodgers. The Dodgers were forced to forfeit the game, according to Nixon, as the team lacked enough players to form a team.

"They did end up playing a little scrimmage game, where Seligman gave them two of their players and the Dodgers ended up winning that game 6-5. But unfortunately it doesn't count in their standings," said Nixon. "They still get a loss because they only had seven players."

The Williams A's played the Williams Dodgers May 21, with the A's taking the win for the evening. The Ash Fork Cubs also played the same evening against Seligman, with Ash Fork taking the win. The team went on to play the Williams Yankees May 22. The Yankees took the win with a 10-run-rule. The Diamondbacks took on the Grand Canyon Phantoms next in an exciting match-up between the two teams. D-Back Kohl Nixon popped a single late in the game, stole second and third base, and then stole home to tie the game between the Phantoms and D-Backs. Teammate Alexis Soto followed Nixon's lead with a single himself, where he subsequently stole second and third base, then scored on a passed ball at home plate, winning the game for the D-Backs with a final score of Diamondbacks 4, Phantoms 3.

It was a repeat of the May 22 game when the Williams Yankees scored another 10-run-rule, this time against the Williams Dodgers May 23. Yankee Jimmy Perkins hit a home run over the fence during the match. The D-Backs played the Williams A's following the Yankees game in a highly anticipated match.

The D-Backs remained undefeated, however, when they took the win against the A's. Jeff Brownlee pitched for the A's, while Kohl Nixon pitched for D-Backs. Final score for the game was Diamondbacks 7, A's 3. The D-Backs walked away 12 and 0 for the season to date, with the A's counting only two losses to the D-Backs team for the season. The Yankees are in third place with a total of four losses to both the A's and D-Backs.

Adrian Solano and Kohl Nixon lead the league with hits over the fence for the 2007 season. The city tournament will play in Williams at the end of the Little League season. All-star selections will also be made June 15 to honor stand out players for the year. Winners will be announced June 16, according to Nixon, who added that team managers select the winners. Players are then voted onto the all-star teams.

"It's going to be a close season. We're more than halfway through. We play each other, we watch each other, we know which kids are stand out," said Nixon. "We're hosting the nine and 10-year-old all-star tournament this year in Williams. That's going to run from June 25 through July 4."

"That's for District 10, which we're in," he said. "If you win the tournament, then you move on to the state tournament. That's a very tough competition. We've got some good teams. It's been an overall good season."