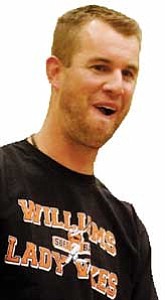 Coach Tristan Heisley was honored with the 2A North Coach of the Year award for his efforts in bringing the championship to the Lady Vikes for 2007.

The Phoenix Suns may have had a tough night May 16 when they took on the San Antonio Spurs in game five of the Western Conference Semifinals, losing to Bruce Bowen and his teammates 85-88, but things were a bit sweeter closer to home. Williams Viking athletes were honored the same night as the Suns agonizing loss in a ceremony at the Culinary Arts Room of Williams High School. A large group of parents turned out for the event, despite the Suns game and despite the little league games being played a number of blocks away, though the numbers did seem slightly diminished because of it.

The Spring Sports Banquet offered a number of highlights, including mention of the hole-in-one shot scored by student Mathew Verser under the direction of Coach Denis Kirkley, who awarded Verser with a commemorative trophy to honor the achievement. The trophy, Kirkley said, is designed to hold the winning golf ball. Coach Phillip Echeverria honored his players for the 2007 baseball season during the banquet for all their hard work, as well as offering a few words of advice to players who suffered academically during the season and were subsequently taken off the team. Echeverria said he expects those players to turn into star athletes in the coming season.

Coach Dan Ayub honored his players on the Williams track team during the May 16 banquet and said he appreciated the team spirit shown by all members of the Vikings team. He presented exchange student Nathalie Neiderberger, who took first place in three events during the recent regionals held in Phoenix May 4, with a T-shirt to honor her wins. Neiderberger took first place in high jump, long jump and 300 hurdles. Girls' softball Coach Tristan Heisley ended the banquet after introducing the girls and thanking his assistant coaches Tim Pettit, Bob Fogg and Edgar Brown. Members of the Lady Vikes then showed off their plaque commemorating their 2A North Championship. The plaque, according to Heisley, arrived May 15 and it was the first time the girls had seen it. As an added plus for the girls' team, Heisley was chosen as 2A North Coach of the Year for his work with the team. It was Heisley's first year coaching the team. He said he could not have done it without the invaluable assistance of Pettit, Fogg and Brown.