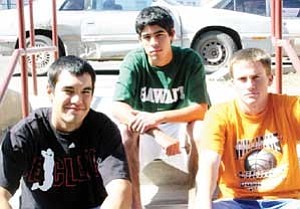 With the end of baseball, Williams High School (WHS) Vikings players are now looking forward to the annual Spring Sports Banquet, in which individuals and teams are honored for all their hard work during the season. The Vikings ended their season in Phoenix after a game against Hayden Winkleman at MaryVale Sports Park with a final overall record of 11, 14 and 1. The Vikes lost their match against the Hayden Winklman Lobos with a final score of Williams 1, Hayden Winkleman 14. Vikings Coach Phillip Echeverria said he hopes to see some improvement in the players next season, which may be hard to accomplish, as three of Echeverria's key players for the 2007 season will graduate this month.

Seniors Derek Gauna, Jake MacDonald and Abel Valdez all said they thought their last season, despite its ups and downs, was a fun one.

"It was a lot better than last season," said Gauna. "We more than tripled our win total, so it was a lot more of an exciting season this year."

"I didn't really know what to expect since this was my first time playing baseball in high school at least," said Abel Valdez. "It just went a lot better than I expected it to be. The new coaches, they made it fun and showed us just a lot about life in general."

Gauna said he has some plans for life after high school, but is still a little unsure about where that life might take him. MacDonald and Valdez echoed his sentiments.

"I was thinking about going to Yavapai, but I might just go to Coconino Community College," said Gauna, who added that he might seek a degree in business.

"I'm not sure exactly what I want to do," Gauna said.

"I'm planning on going to Coconino just for like a year to do the basics and figure out what I want to do with my career," MacDonald said.

Valdez said he was unsure as to whether he will go to college immediately after graduation.

"I have no idea what I'm going to," said Valdez. "We'll see what happens I guess."

All three seniors were selected as All-Stars for various sports in the 2007 season. Valdez was selected as an All-Star player for basketball, Gauna for baseball and MacDonald for football. Gauna said his All-Star game would be June 2, while MacDonald said he would play June 15. Valdez was supposed to compete in June as well, but had to cancel when he discovered that the competition had been moved to May at a time that conflicted with his senior trip. Members of the Vikings, as well as other seniors, will travel to Disneyland, Universal Studios and the beach for this year's senior excursion.

MacDonald's parents are Nancy and Dave MacDonald of Williams. Gauna's parents are Maryellen Calley and Don Calley. Valdez's mother is Nancy Valdez. All three thanked their parents for their support.

Gauna said he would miss sports at WHS.

"Definitely, it's been one of the things that made high school fun," Gauna said.

Gauna said his favorite sport was basketball, though he admits that he was probably better at baseball. MacDonald said he preferred football to the other sports he played, but added that he liked all of them. Valdez said his favorite was basketball when it comes to high school sports. This was his first year playing baseball for the Vikings.

"I played football my freshman year too," said Valdez. "But I decided I'd rather just play basketball because high school sports can take a lot out of you."

MacDonald, Gauna and Valdez expressed their gratitude to Coaches Echeverria, Kirkley and Hatcher for their support in their athletic endeavors. The three seniors also thanked football coach Rick Shipley for his assistance as well.