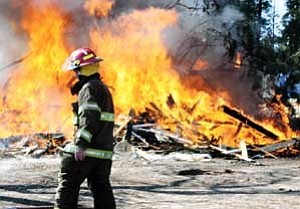 A Williams Volunteer Fire Department firefighter walks near a fire at the city of Williams Water Plant earlier this year.

Fire isn't picky when it comes to the seasons. There can be an equal number of dangers in the dry, hot summer as there are in the chilly winter months. Mike Schulte, public information officer for the Williams Volunteer Fire Department (WFD), says the department is just as busy in both seasons.

"During winter, people are building fires in their homes, chimney fires [and] you have accidents on the highway. I think it's almost an even type thing," said Schulte. "As far as number of calls go, it's almost an even keel. As far as (summer) wild land fire goes, we respond as first responders within the city limits. A lot of it is going to be on National Forest land, so we would be there until the Forest Service arrives."

The Pumpkin Fire, which started in 2000, counts as the largest fire in recent history. Almost 15,000 acres burned in the month-long blaze located in the Kendrick Mountain Wilderness area. The fire burned in both the Coconino and Kaibab National Forests. Within the city of Williams, Schulte said there have been a number of devastating fires that took out two to three city blocks.

Schulte said that, besides wildfires, structure fires and vehicle accidents take up a majority of the fire department's summer. The WFD trains extensively as well, Schulte said, both internally and with Forest Service as well as other entities. WFD also works with young children when it comes to fire safety by speaking at area schools as well as other community training exercises.

"We have our own training program," Schulte said. "We use National Fire Protection Association standards. We teach our IFSTA manual (the International Fire Services Training Association)."

There are currently four lieutenants on the fire department in Williams. Two of them are specifically geared toward training, according to Schulte. Their job, he said, is to train new recruits for a two to three month training period. There are currently 23 firefighters in the Williams Fire Department out of 30 available positions, with two stations in town. One is located between Fourth and Fifth Street on Grant. The second is located on Rodeo Road.

"We do a monthly drill, or practice, where we do one specific training and have everybody involved," said Schulte. "Periodically we'll have the gas company come in, we'll do a ladder training, hazardous materials, just a number of things. Williams Fire Department is still an all-volunteer fire department, so getting a number of these programs going has always been kind of difficult. People have jobs and the time to get a lot of leg work done on (various community programs) is pretty difficult to do."

Fire officials from a number of local and state agencies completed the Community Wildfire Protection Plan for the greater Williams area in 2005. The plan addresses wild land perspectives from the Forest Service, state and private entities, including other volunteer fire departments from northern Arizona. Schulte said the WFD has been working to implement the plan.

"We're still considered, even though moderate, a community at risk because of the surrounding area," said Schulte. "Part of that whole program includes, and works with, the Firewise program."

The Firewise program, according to Schulte, teaches residents and businesses located in areas adjoining forests, called Wild Land Urban Interfaces, what they can do to prevent fires. The WFD is currently working with the high school's media class to create a disk for locals that would include tips on what rural homeowners can do regarding their property during the fire season. He said there were a number of preventative measures a homeowner could take to keep their properties safe.

"Things like ladder fuels‹getting the small brushy fuels that lead up into the trees and create almost a ladder for fire to go up, getting those things thinned out, getting the trees thinned, making sure your chimney has a spark arrester on it," Schulte said. "The theory, being in a rural area, is to try and make your home safe enough that the fire department doesn't have to respond. There's a lot of areas out here that need a lot of work, but there's also a lot of work down on the fringes with thinning projects that either the Forest Service has done, the state and county have done. Some of these residential development areas are required now to have some tree thinning and brush removal and heavy fuels removal, those kinds of things, that are all part of this development program. As houses start getting built in those areas, they are somewhat protected."

One way for homeowners to clear material from their properties is to take part in the Rural Communities Fuels Management Program, according to fire officials. The Rural Communities Fuels Management Program is composed of a partnership between the Forest Service, the Williams Fire Department and the State of Arizona. Residents can sign up to have their personal property thinned by the partnership at a low cost. According to Forest Service Public Information officer Jackie Denk, the partnership is funded through a grant to offset the landowner's cost.

"It ends up costing the landowner about $250 to $350 an acre, which is unbelievable. If you have ever had one tree removed, it costs $350. To be able to get a whole acre treated and thinned, where you might have to take out 100 trees, who knows?" said Denk. "Right now we're particularly focusing on south of Williams. If anything got started south of Williams, we're in big trouble, so the partnership is particularly focusing on the wooded areas south of Williams." Anyone interested in having his or her properties thinned can contact Denk at (928) 635-5607.