A Grand Opry kind of night
Family event begins at 7 p.m. Friday at the barn 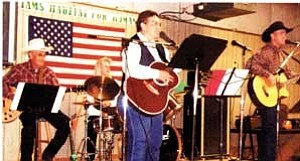 The Grand Opry Band entertains the audience during a recent Opry Night. Proceeds from the event benefit the Williams Habitat for Humanity organization.

The semi-annual Grand Opry fundraiser, which raises money for the Williams Habitat for Humanity group, will once again offer music and activities at the Bob Dean Rodeo Barn this Friday with a raffle, cake walk and live music. The event will run from 7 to 9 p.m. and costs $6 for adults, $3 for students and seniors and $15 for a family of 4 or more. Free popcorn will be offered, along with $1 sodas and water, according to event organizer Ruth Sanzari.

"Approximately a little over 200 attend them," said Sanzari. "It's more of a family oriented event, so all ages attend. The elderly and middle age particularly attend it because they like to dance."

The Pony Express Band, who have participated in various Williams events in the past, will be on hand to entertain the audience with their own inimitable style of bluegrass music. The Williams Opry Band will also play during Friday night's event. Members of the band, which includes Lance Beavers, Debi Campbell, Jan Bardwell and Phil Sanzari, started the fundraisers for the Williams Habitat group in 2003.

"We initiated (the Opry night) back in November of 2003. We've had two Opry Nights a year. One in the spring and one in the fall to raise money," Sanzari said.

"We have the pledge of the flag and we introduce the Williams Opry Band and then we have door prizes and then the Pony Express band will come on," Sanzari said. "Next we have the cakewalk, which everybody loves. You buy a ticket and it's quite a bit like musical chairs."

Williams Habitat for Humanity completed their first home in the Williams area in November 2006. Besides fundraisers such as the Opry Night, Sanzari said the group is always on the lookout for donated land or land for sale at a "reasonable price." The first house for Williams group, built for new homeowner Melissa Mejia, is located at the top of Fifth Street.

For more information on the Grand Opry Night and the Williams Habitat for Humanity, contact Sanzari at (928) 635-0386.