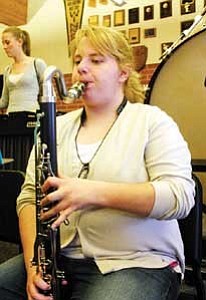 Music teacher Scott Grimes has a lot to be proud of when it comes to his music students. The young musicians, composed of students from both the Williams-Elementary Middle School and Williams High School, performed admirably during this year's All Regional High School Band Competition held Feb. 15-17.

"Each one of these students learned a solo, went in and played before a professional musician who judged them on their rhythm, their tone, their style, the intonation of the music and then they were rated ‹ either superior, excellent, good, fair or poor," said Grimes. "We had a number of goods, we had a number of excellents and we had 13 superiors, which is really phenomenal for our school, since none of these students take private lessons."

"With regards to the band members, we had 12 individuals make the band. There are schools that come from all over northern Arizona to apply for this," said Grimes. "Some schools had zero students make it. Northern Prep had 13. Every single one of those students takes private lessons. We had 12. We tied with Mount Elden Middle School and we beat every other school. We beat every school that tried out for that."

Grimes said there were close to 700 students who tried out for the all-state band.

Students, said Grimes, do not know which of the three scales they will be tested on, so they have to learn all six prior to the competition.

"We had three kids make the all-regional band for the high school which is a lot harder to make. For our region they dip all the way into Phoenix to try out for this and we had three students make it this year. We had seven last year, I had two kids with the flu that probably could have made it and couldn't try out. When they make the all-regional band they have the opportunity to try out with the all-state band, which is the best of the best in the state of Arizona. Ariana (Tobin) was first chair, contra bass and first chair bass clarinet."

The all-regional band members will travel to Lake Havasu for a Saturday night concert to be held May 4.