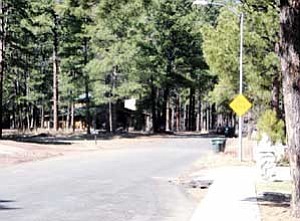 The end of Allston Way would have been the beginning of Forest Canyon Estates. Access to the development along with drainage issues were discussed at the March 8 Williams City Council meeting.

"An approval right now gives us a green light to sit down and work on these issues, (to) work with the city. Drainage is a major issue. We've come with something here that is going to help. Let us get our engineers on it and start figuring this out," said developer Mason Cave.

"I think the hinge-pin of this process is (whether) council wants to grant access across city property to Sixth Street, without which the project is not viable," said city planner Harry Holmes. "Secondarily, does the city want to allow Allston Way as the primary access in conjunction with the Sixth Street access? We would approve the project on the basis of the council being satisfied with the access."

Mason Cave said an idea, proposed through the Developmental Review Team (DRT), was to possibly "stub out" a road that could be connected to Route 66 sometime in the future. Lots at the stub-out would be left vacant, according to Cave, in order for them to be used as an emergency turnaround. Cave said TMD had contacted the Pouquette's in order to work out a road easement through their property.

"We talked to the Pouquettes. We heard that the property was for sale. It's not for sale," said Cave. "Right now they're not selling property."

Mayor Ken Edes said there will always be a potential from traffic in the area of the proposed subdivision and liked the idea of additional access if possible.

"Even if they had the Route 66 connection and the Allston Way connection, for their ingress and egress ‹ so they had two ‹ you have a potential bottleneck. So it kind of made sense for some other access up there on the property, with some other access provided through the forest service land, which is soon to be the Yavapai Ranch Land Exchange, or Buckskinner Park, or our property that we have right there. They have done due diligence with the Pouquette's and they discovered the same thing we did ‹ that right now is not a good time," said Mayor Edes.

Councilman Dent said he was concerned about access in and out of the proposed subdivision, especially in the event of a fire.

"If that one street gets shut, you've got at least three-fourths of that subdivision that can't get out," said Dent.

While disappointed with council's decision, TMD owner Dan Rhea said that he would continue to work on the project.

"We're going to continue to work with the council members and the city staff and find a solution that's agreeable to everybody, we're not giving up," said Rhea. "We believe in the strength of this community, we'll work with everyone to make it happen."

According to Holmes, council's rejection of the subdivision means that Forest Canyon Estates will have to go back through the entire approval process, beginning with DRT, then P&Z and then before council once again.

"They'll have to go back to DRT with a new plan," said Holmes. "The site is a tough site, it's a challenging site. It's apparent from council's decision that the design they chose for the site is not going to be acceptable. Some kind of redesign is needed."

Forest Canyon Estates is composed of 26 multi-acre lots and 93 single-family lots. The property is situated on the southwest corner of Williams. TMD Group purchased the land in 2004 from owner Charles Brookbank. Rhea said the group would act as a management firm for the property.