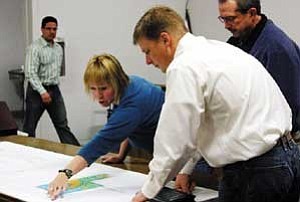 Forest Canyon Estates, the much debated development at the south end of Williams, made it past the preliminary plat stage Feb. 20 at the regular meeting of the Williams Planning and Zoning (P&Z) Commission. The preliminary plans will go before city council for approval March 8. The subdivision, put forth by TMD Group of Phoenix, was the only item on the agenda.

Preliminary designs for Forest Canyon Estates were approved with the understanding that TMD's final plat would not be approved without addressing a number of issues, including access to the subdivision, lengths of cul-de-sacs and concerns about snow removal and fire access, and improvements to the area that would constitute a public benefit, such as additional water storage that TMD says they have already allowed for in their plans. Harry Holmes, planner with the city of Williams, said the project is already on the Williams City Council agenda for March 8.

"Next it goes to council," said Holmes. "At that point, the developers put all their ducks in a row."

Dan Rhea, owner and principal of TMD Group, told council at the Feb. 20 meeting that a number of concerns have been addressed by the group ­ from meetings with Mayor Ken Edes to advertisements in the News. Rhea and partner Mason Cave, along with engineer Guillermo Cortes, were present for the Feb. 20 P&Z meeting. Rhea said he was happy about P&Z's decision, but added that there is more work to be done before the project will move into the final plat stage.

"I think the meeting went fantastic, we were excited about the P&Z committee, they really seem to be a lot more open to it, not that they were opposed to it prior. I think there was a general need to work together. We crossed a hurdle, but we're not over the finish line," said Rhea. "There's still some work to do to go from preliminary plat to final."

Traffic flow and other concerns

"We took what you said to heart and we've reached out and modified our site," said Rhea at the Feb. 20 meeting of P&Z. The group also met with members of the Williams Unified School District and held open public meetings. TMD invites e-mail inquiries from anyone with questions regarding the project. Developers also ran a full page paid advertisement in the Dec. 13 edition of the News and has since become members of the Williams-Grand Canyon Chamber of Commerce as well.

Forest Canyon Estates, composed of 26 multi-acre custom lots and 93 single family lots, is situated on 60 acres of land on the southwest corner of Williams. The development has met with a number of concerns in the last six months, which includes ingress and egress issues put forth by city staff. Homeowners came forward to dispute property lines that differed from the existing property corners in the area as well during the Oct. 17 meeting of the Williams P&Z Commission. TMD has since resolved the issue by allowing the existing survey to stand and said they would not contest the property corner's location. The Williams Unified School District Board also spoke out on the proposed subdivision at their regular meeting Dec. 6, where they raised concerns over vehicular traffic down a street that is often used by student's who walk to and from school. Traffic from the subdivision is expected to flow down Sixth Street.

Jeana Stevenson, whose property is located against the proposed subdivision, questioned representatives from TMD Group on a number of topics during the Feb. 20 meeting. Among them were drainage concerns and possible impacts to area wildlife. Stevenson has lived in Williams for 23 years and seen flooding in the neighborhood.

"That's a huge concern. You know that's not these guys' fault and I actually do agree with them. Putting in new houses and new pavement is going to change how the water runs," said Stevenson.

As far as wildlife, Stevenson said she is worried about a trail, which she said leads to a number of locations including Camp Clover, that will eventually ring around the new subdivision.

"I hike up there a lot. You see deer, you see elk, you see fox, cat, there's a lot of stuff up there," said Stevenson. "None of us want this to happen in this density,"

Stevenson voiced concerns that Forest Canyon Estates would end up similar to the new subdivision located in the Bellemont area.

"There's nothing we can do about that, they are within their legal rights. They're going to build just like they did at Bellemont, right smack against each other. It's not harmonious with the rest of us," said Stevenson.

"There will be some delineation," said Rhea about separating the subdivision from potential wildlife areas, though he added that the delineation might be as simple as a single-pull fence. Twenty-five percent of the property has been dedicated to open space, according to Rhea.

The TMD Group purchased the property for Forest Canyon Estates in 2004 from owner Charles Brookbank. The group will act as the management firm for the property, according to Rhea. He said there is no set date for a groundbreaking.