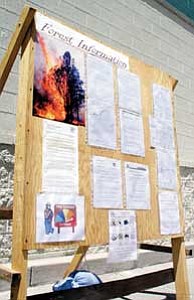 As concern mounts over fire danger, officials with the Forest Service have placed information boards at various city locations to notify visitors about fire dangers in the Kaibab National Forest. Williams City Council will decide the fate of this year’s fireworks tomorrow during their regularly scheduled meeting.

Officials with the city of Williams said this year's highly anticipated fireworks show will not happen, though the final decision will rest in the hands of city council, who will decide the matter of the Fourth of July tomorrow night during their regularly scheduled meeting beginning at 7 p.m. Should council opt to cancel the fireworks display, according to officials, an alternative date for the display may be considered. Fire danger cancelled last year's display at the last minute as well and hope was high that it would not be the case this year. Williams City Manager Dennis Wells said city staff will recommend the cancellation to council tomorrow based on a number of considerations.

"Our location has been pulled, due to fire danger, at Gonzalez Lake," Wells said. "It's really difficult to find a location as good as the Gonzalaz Lake property."

An alternative site, located near the cinder pit on Clover Hill, was also considered according to Wells, but property owners there expressed concern over the idea.

"I think the fire chief is comfortable with going ahead, but I think it's more the discomfort of the property owners that has been the deciding factor against it," Wells said, adding that council will make the final decision.

"It's tough because you get all built up for it and you raise money. The fire danger stops the whole thing dead in its tracks and I hate to see that. One of my suggestions is that council consider looking at alternative dates," Wells said. "I think council will make the final call Thursday evening."

The Kaibab National Forest, for the summer of 2007, remains at extreme conditions - its highest level of fire danger.

"Mainly the people that own the property are worried about the fire danger. That's it, that's the decision right there," Parenteau said. "I don't think there's a backup site. We're just basically waiting on council to make that decision."

While city officials order the fireworks from a location in Phoenix, members of the Williams Volunteer Fire Department take charge of the devices once they arrive in Williams.

"We take charge of them once we get them on site," Parenteau said.

On the holiday itself, it is also the responsibility of the WVFD to ignite the display.

"We set them off. We have to put what we call 'tubes,' like a gun barrel, in the ground. We put those in the ground, up to three feet in the ground, just so they're stable. This year we're going with electronic shells. We use electronic signals to set them off," Parenteau said. "They can ignite at any time. They'll go sideways instead of up. We've had that happen before (and) that's why we wear our full PPE's when we're out there."

The annual Fourth of July celebration is a busy one for the fire department. While most of Williams occupies the day with family members and barbecues, members of the WVFD spend much of their day preparing and firing the evening's dazzling pyrotechnics display - and to make it as safe as possible. Members of the fire department will also take part in this year's annual Fourth of July parade.