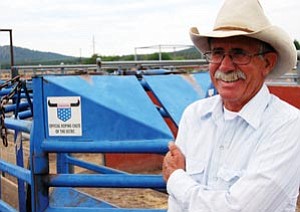 Cowboy Tad Dent said roping is something he does, not just in the Cowpuncher’s Reunion Rodeo, but on the job as well.

Roping big animals, for some people, comes just as easy as driving a delivery truck or making the perfect pizza. With enough practice it can become second nature. While this may seem like a big deal to some people, for a ranch hand, it's his job. Just as accountants and mailmen have their specialties, so do ranch hands have theirs.

Tad Dent, 58, has been a ranch hand most of his life. For him, roping is a part of the job. He's been a cowboy, and practicing the trade of roping, since he was a "little bitty guy."

"In junior high, I guess, was when I really started with roping competitions in junior rodeos," Dent said.

For the last 22 years, Dent has worked for Babbitt Ranches, located along Highway 180 north of Flagstaff. Though he was born in Williams, he said he's never actually lived in the town.

"We take care of cows. Right now I'm feeding one bunch of cows and hoping it rains on another bunch of cows, which it finally did. We're starting our forest rotations and moving cows from one pasture to another," Dent said.

He said the hardest part of being a cowboy is the lack of water. Hauling feed, he added, could quickly take the profit out of a cow.

The best part, he added, was getting to be outdoors.

Dent said the Cowpuncher's Reunion Rodeo, to be held this weekend at the Bob Dean Rodeo Grounds, differs from a "standard" rodeo event in that most of the participants are actual working cowboys.

"These guys just roll into town, do their thing and leave. With the cowboy reunion, it's four days long now and some people are already here. You get to see all your friends that you only get to see maybe once a year. They're all working people. They're connected to the industry somewhere. Dave Burt, he and I have been roping together 15 years. This is the only place we see each other - here at the reunion."

Tying cattle isn't some thing Dent does just for the Cowpuncher's event. As with all events at the reunion rodeo, the skills one sees in the arena are skills honed in the great outdoors.

"There's times when you have to rope something out there on the ranch and that's what this event comes from, from guys roping," Dent said. "I'm pretty good at it, but there's a lot of people that are a lot better."

Dent said a good roping time depends on a number of factors.

"I head. I rope the steer. You got three legal head catches. You got around the horns, half head or around the neck. You're the one that has to catch him, turn him and slow him so the heeler can get there to catch the hind feet. Roping either end takes a lot of skill and a good horse," Dent said, adding that good timing is also just as important.

Dent's times have ranged from seven seconds to 10 seconds.

"Usually my average is right around 10 (seconds)," Dent said.

On the job, he added, you don't necessarily have to be as fast as you do in a competition.

"You don't have to be real quick. You try to be quick, because the less stress you put on the animal, the better it is."