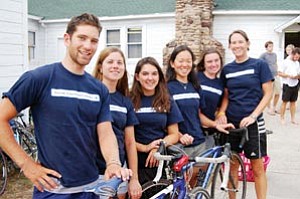 Most college students are hard to tie down, but a select few are even harder than most. These students, from colleges on both coasts, spent the majority of their summer with a large dose of exercise and a lot of determination. These students, however, also provided a large helping of support as they traveled, by contributing their manpower to various affordable housing projects across the nation. It's all part of the Bike and Build experience, which sends college students on cross country trips each summer, and is designed to help bring affordable housing to various locations across the United States.

One such group, riding their bicycles from North Carolina to California, stopped in Williams July 19 as they made their way to Prescott and from there, on to San Diego, Calif. to end their long bike ride.

"There's six routes going across the United States this summer. The reason we're biking is for affordable housing," Luna explained. "Before the trip, each cyclist raised $4,000, at least, to participate in the trip. There's 31 of us on this particular trip."

"It's been a real treat, because we've been on the Navajo Reservation for the past several days, so to be here and the downtown's right there, has been a nice change for us," she said.

While in Williams, the bicyclists were rewarded for their hard work by Williams residents Maryellen Calley and Chenin Sulivant, along with other members of the Southwest Institute of Healing Arts, who offered free massages to all the riders during their Williams stay.

"My students have to do it for a class, so this was perfect timing, it's their class time and their volunteer time," said instructor Mia Camacho.

"We've done hospitals where we have a geriatric class and we go the old folks' home in Flagstaff. We try to do things back for the community and I thought this was a really good cause. They deserve it."

"What they've been doing is they have been adding a trip each summer. This is the newest trip; you have six to choose from. Next year there will be seven to choose from. Each one has about 30 cyclists. Each one of those cyclists has raised about $4,000. At the end of the summer, Bike and Build will have donated $1 million to affordable housing."

A majority of that money will go toward Habitat for Humanity, Luna said.

"A lot of it does, because they're the huge affordable housing group that we can work with in all the cities that we pass through. We have it going to, our particular group (does), to the Orange County Habitat in North Carolina through the University of North Carolina Chapel Hill."

A third of the bicyclists, she said, were from North Carolina.

"Overall, Bike and Build is a non-profit based out of New York. The Bike and Builders have been primarily east coast college students, but through word of mouth, a lot of participants have come from all over the country now. I'm from San Francisco. We have people from the Midwest on this trip. Everybody is a college student, just graduated, in between, things like that. The age is 18 to 25," Luna explained.

The group worked with Prescott's Habitat for Humanity July 21 before moving on to California.

"That will actually be our final build day," Luna said. "Along the way we've built primarily for Habitat for Humanity, but we also work with other affordable housing organizations. Most people will fly back with their bikes to the east coast. We started in Nag's Head, North Carolina and we'll end in San Diego, California on July 27. We dipped our rear tire in the Atlantic and we're going to dip our front tire in the Pacific."