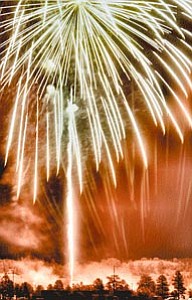 A number of city officials were subpoenaed to appear in front of a grand jury due to the fire that started from this year’s short-lived fireworks display.

Within days of the 0.6-acre fire, representatives with the U.S. District Attorney's Office issued subpoenas to Williams Mayor Ken Edes, Williams City Manager Dennis Wells, Assistant City Manager/Finance Director Joe Duffy and Williams Volunteer Fire Chief Bud Parenteau. The subpoenas call for the four individuals to supply all pertinent information in regards to the fireworks display, including information leading up to the decision to hold the fireworks, or appear before a grand jury Aug. 28. Williams city council voted to approve the fireworks display during their regular meeting June 28.

According to Wells, city officials will supply all the information required by the subpoena.

"They're examining this situation to determine whether a sound decision was made. We're cooperating fully, supplying them with all the information (and) we're very confident that the facts will speak for themselves," Wells said. "The subpoena states that we can either appear Aug. 28 or send the information in prior to that date. Our plan is to send the information early on."

Wells said he was surprised by the subpoenas originally, but not that the media, both locally and statewide, afforded so much attention to the story.

"I was surprised when I got it, because I felt all along that we were very responsible in what we did. There have been many instances in the past where Williams has conducted fireworks shows in extreme fire danger. In the many years of fireworks displays, we've never had a human injury or a fire get out of control. There have been many times in the past when spot fires have happened as well. If you expect them then you're prepared.

Our decisions and our planning were very responsible."

Wells said officials, as well as council members, examined all pros and cons prior to their decision to go ahead with the fireworks display.

"One advantage of having an organized fireworks show is that children and people with illegal fireworks and small fireworks tend to put on their own display when they do not have an organized fireworks show to go to, that was one point in consideration with this. It was one of the pros that I think went into the decision making," Wells said, adding that he believes reason will prevail at the district attorney's office once the facts are presented to them. Though he could not say for sure what led to the investigation, Wells believes the U.S. District Attorney's Office undoubtedly received numerous complaints after the display was cancelled.

"It looked very dramatic. I'm sure they received a lot of phone calls the next morning, perhaps not knowing the whole story," Wells said.

No subpoenas were issued to representatives of the Kaibab National Forest, according to Forest Service officials. Nor were any issued to officials with the city of Page, according to Page city manager Bo Thomas. Two spot fires occurred there as a result of the fireworks display, Thomas said.

"We didn't have any fires up here. We had a tamarisk catch on fire up here but that's about it. We had two of those on our golf course, but that's it," Thomas said. "Everything that we did was within our corporate boundaries. Really, there's no national forest lands close to us other than the Coconino National Forest and the Kaibab."