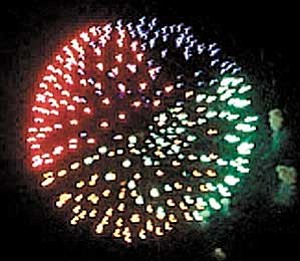 After two sites were denied to city of Williams organizers, it seemed as if the fireworks show would be cancelled in Williams for the second year in a row. That changed June 28 after council picked a second alternative to their first choice, located at Gonzalez Lake near the Interstate 40 corridor. Their first alternative, near Clover Hill, was also denied due to fire danger concerns in the area, leaving many with the impression that the display would have to be cancelled. The new site, on city-owned property, is located at the wastewater facility north of downtown near Airport Road - a site city officials said would work well for the display - with limited fire danger.

The display, scheduled to begin at dark (between 9:15 and 9:30 p.m.), will take place on the road parallel to the construction site of the city's new wastewater treatment plant. Parking and seating will available at the Bob Dean Rodeo Grounds. Additional parking will also be provided northwest of Interstate 40 off Airport Road.

City officials urged all spectators to keep clear of the railroad tracks, the interstate and private properties in the vicinity. The fireworks display, scheduled to last half an hour, will be stopped should a brush fire occur. Clean up, according to Williams City Manager Dennis Wells, would be relatively easy.

"We landed on the possibility of utilizing the water department wastewater facility site," Dennis Wells, Williams City Manager, told council June 28. "It will be contained and all on city property. We would be able to utilize the rodeo grounds for parking."

Bud Parenteau, fire chief with the Williams Volunteer Fire Department, told council that he did not foresee great risk in the area.

"I've talked to several people in the Forest Service. They basically said they don't think there's a problem," Parenteau said. "The location is basically grass. So if there is a fire we're going to have approximately 15 fire trucks from different agencies. I don't see a problem with it."

Millions of dollars are spent in fireworks displays throughout the nation each year. Census officials estimate that a whopping $206.3 million were spent on fireworks imported from China in 2006. US exports of fireworks came to a scant $22.6 million by comparison. Locally, city of Williams organizers spend $13,000 annually, of which $6,000 is raised by the Williams Rotary Club.

An estimated 669 shells will be fired during tonight's display, according to officials with the Williams Volunteer Fire Department.

Besides the highly anticipated fireworks display, a number of other Fourth of July activities are also planned for various locations in Williams. Visitors to Second Street in Williams will get a blast from America's past as they look upon a collection of old time tractors, collected from various locations and on display for the holiday. An art show entitled the, "Art of America Show," will show off unique works of art from 9 a.m. to 7 p.m. at 314 West Route 66 in the old Babbit building across from the Sultana Bar.

"The art show is going to be an indoor art show. It's sponsored by the Artist Coalition of Flagstaff, (who) is sponsoring the Williams art group's Art of American Show," said Williams-Grand Canyon Event Coordinator Sue Atkinson.

Members of the Community United Methodist Church will also hold an ice cream social today from 3 to 4 p.m. Organizers plan to offer up chili and chili dogs as part of the event.

Members of the Williams Rotary Club will hold their annual barbecue prior to this year's fireworks display. The barbecue will begin at 6 p.m. adjacent to the rodeo barn at the Bob Dean Rodeo Grounds.

The annual parade, scheduled to begin at 6 p.m. will also offer a little small town charm for visitors and residents alike. See the story, "Adding some color," for more information on this year's Independence Day parade.

"There's going to be tons of cars, lots of classic cars coming," Atkinson said. "I think it's going to go great. With the fireworks being on this year I think we'll have a really good turn out in town."

Independence Day celebrates the country's birth as a sovereign nation. The Declaration of Independence was signed in 1776, thereby breaking off the nation's ownership from Great Britain. In July of 1776, historical statistics reported an estimated population of 2.5 million Americans at the time the declaration was signed. An estimated 302 million Americans will celebrate the Fourth of July in 2007.

According to officials with the US Census Bureau, American names are quite popular across the country. Thirty-two locations across the nation have the word, "eagle," somewhere in the name. Eleven locations have the word, "independence," in the name. Five places use the name, "freedom," while five also carry the name, "America," somewhere in their title. One location, Patriot, Ind., carries the word, "patriot." Patriot has a total population of 195 residents.