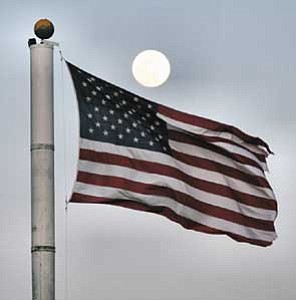 A prayer service will be held today for the men and women in the Armed Forces at Monument Park in Williams beginning at 4 p.m.

U.S. troops in both Afghanistan and Iraq will soon receive a gift from home, as a number of Williams residents plan a special Fourth of July Prayer for U.S. Troops at Williams Monument Park. Prayers will also be said for world peace, the nation, community and other matters, according to event founder Lucy Adams. Opening prayers will begin at 4 p.m. While the prayer vigil is for anyone who wishes to attend; Adams extended a special invitation to members of the military who may be in Williams to celebrate the country's Independence Day. The vigil is designed in a non-denominational manner for people of all faiths.

"We need people on leave to be there," she said, adding that she hopes to see firefighters and police officers, as well as other emergency workers, participate in the service as well.

"The fire department, police, whoever wants to be there is welcome to be there," Adams said.

Adams asked that participants bring photos of loved ones currently serving in the Armed Forces to be placed on a bulletin board. The board will be on display during the event. The event will be photographed, according to her, and sent to troops currently serving abroad.

"We're going to upload them and get those pictures circulating in both Afghanistan and Iraq. It's going to be for the troops. Some of the soldiers that are from town are not here for the Fourth," Adams said, citing numerous examples of local Williams residents who are currently stationed abroad.

One such resident, Jeff Sutton, fared a little luckier. Sutton, currently serving in Afghanistan, will be on leave in Williams for the event and will be on hand for the service at Monument Park.

Adams, who is a 14-year verteran of the Williams Volunteer Fire Department, currently offers women's bible study groups from her home in Williams. She founded the prayer service in July of 2001, just two months prior to events of September 11. She said she began the events as a way to unify the community by way of prayer.

"It seems as if there are a lot of people trying to take God out of everything these days and this was my way of trying to put him back into our community. I wanted the whole town to pull together and pray about all the different things going on," Adams said. "I took fliers to all the churches in town. It's for everyone."

She added that the services originally began by praying for a variety of issues affecting the community, nation and world, such as the recent drought for example.

Pastor Tim Milner, of the Family Harvest Church will be on hand for the prayer. Lori Edes, from Canyon Chapel, will also offer prayers for the service, as will Pastor Billy Martin of the United Community Methodist Church, Minister Terence Hatcher of the Galilee Baptist Church, Pat Wamble and Kathie Craig as well. The Women's Aglow International of Williams, whose members include Adams, Cathy Maryn, Dorothy Hrenchir, JoAnn Pettit, Fran Mendoza, Lenora Reed and Jennifer Cox, sponsors the event. For more information, call (928) 607-3219.

"Please come take a picture with us," Adams asked. "Remember, one woman took God out of the schools, just think what a community can do together, praying for our troops to come home."