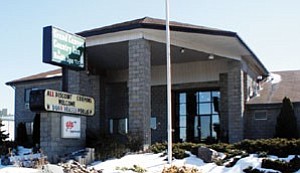 The Grand Canyon Country Inn, located at 911 W. Route 66, is scheduled to be renovated as condominiums.

What was once a local hotel ‹ the Grand Canyon Country Inn ‹could soon be permanent housing for 34 families. The Williams Planning and Zoning Commission approved the rezoning and preliminary subdivision plat for the project during the Jan. 16 regular meeting.

The request was made by property owners Jasvant and Chandrika Patel.

The asking price per unit will be approximately $200,000, according to Wayne Hellwig, a developer representing the Patels.

Grand Canyon Villas will not be offered as a timeshare. The units will be owner-occupied, per Fannie Mae standards, said developer Gary Byer. Formed in 1968, Fannie Mae has provided financial products and services that make it possible for low-, moderate- and middle-income families to purchase homes.

While the inside of the current hotel will be completely renovated, there will be few if any changes to the exterior of the building. Two parking spaces per unit will be available, in addition to parking spaces available for guest parking. The parking area will remain uncovered, said Hellwig.

On Oct. 27, the developer submitted an application requesting rezoning to R3 (multi-family residential) from central business district. A notice of public hearing for the rezoning appeared in the News. A notice of public hearing was mailed Dec. 21 to property owners within 300 feet of the site. As of Jan. 16, no written responses had been received, according to Harry Holmes, city of Williams planner.

Holmes added that Williams has drafted a proposed ordinance similar to the one adopted by the city of Flagstaff addressing condominiums and condominium conversions. The ordinance must be approved by the Williams City Council before construction begins at Grand Canyon Villas.

"This decision will not affect future development in the area because the building is already there," said Planning and Zoning Commissioner Bill Baptist.

The hotel was constructed in 1991. The developer has 18 months to obtain the Williams City Council's approval of the final plat and development agreement or the zoning will revert to CBD.