Weather or not!
El Niño may bring chance of more precipitation now through March 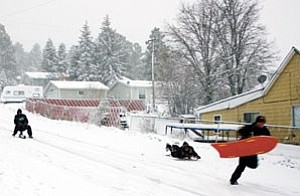 It may be snow, it may be rain. With all of today's technology, predicting the weather is still far from an exact science, but all indicators are pointing to above-average precipitation in northern Arizona now through March.

That was the meat of an annual winter weather update conducted by staff at the National Weather Service station in Bellemont Jan. 4.

"Last year, we were talking about how dry the rest of the winter was likely going to be. This year, with the growing El Niño that we have out in the Equatorial Pacific, it's likely the story's going to be a bit different this spring," said Bellemont NWS Meteorologist In Charge Brian Klimowski.

El Niño is a weather pattern that occurs every few years marked by abnormally increased water temperatures in the Pacific Ocean along the Equator, between Indonesia and the West Coast of the United States. When those higher water temperatures occur, it produces thunderstorms and precipitation.

At the same time, those thunderstorms produce an enhancement and extension of the jet stream that comes out of the Pacific and runs across the lower portions of the U.S. Those storms are subsequently picked up and carried by the jet stream into the mainland.

"Last year, we were in a La Niña, which is kind of the opposite of what we're in this year," explained Bellemont NWS Science/Operations Officer Mike Staudenmaier. "That brings dryer conditions to our area."

La Niña weather patterns are the opposite of El Niño, marked by abnormally lower surface water temperatures along the Equatorial Pacific.

Case in point, the 2005-2006 winter was the third driest on record in the 100-plus years that records have been kept for the area. Luckily, the area experienced what meteorologists called a "miracle March," which brought record-breaking snowfall for the month. Even with that precipitation, however, the overall numbers for the season were abnormally low.

Interestingly enough, the 2004-2005 winter preceding the third driest was the third wettest in the area's history.

Meanwhile, the 2006 summer monsoons may have seemed to be heavy but in reality, the amount of precipitation during that period was only slightly above average. The precipitation scale the NWS uses averages the conditions over a 30-year period from 1971-2000.

So why didn't we see any snow or winter precipitation before the end of November?

It's confusing, but during normal non-El Niño years, winter precipitation usually begins in October. However, El Niño precipitation often begins late ‹ such as it did this year ‹ and takes a while to build up to full maturity.

"It isn't unusual for the beginning of an El Niño event, especially in the fall season, not to be wet," Staudenmaier said. "It really is a true winter phenomenon from January on."

Currently, the El Niño is at a moderate-to-strong stage, which boosts chances for increased precipitation January through March.

How much can we expect?

That, unfortunately, is impossible to tell so early on. Meteorologists can make predictions in two forms ‹ forecasts and outlooks. A forecast is a prediction closer to the actual event ‹ and therefore has more accuracy ‹ while an outlook is a much longer-range forecast and is thereby more vague.

"So essentially, the outlooks are forecasts for opportunities," Staudenmaier said.

Also, there are no signals telling meteorologists whether or not temps will be higher or lower during the January-March period. For that reason, there is no telling just yet if the increased precipitation will be in the form of rain or snow.

One thing for sure is that no matter the amount of precipitation during the upcoming quarter, northern Arizona will still be in a severe or moderate drought situation.

Is the drought over? El Niño delivers wetter than average conditions to the southwest
What happened to winter in northern Arizona?
El Nino ramps up, set to be one of strongest winters on record
NWS predicts cool, dry Christmas for Grand Canyon
Ch, ch, ch, chilly: snow fall drops 18 inches at Grand Canyon's South Rim