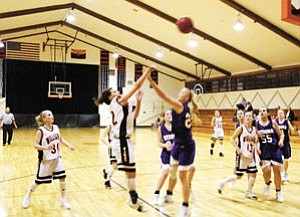 Lady Vikings player No. 12, Jenise Pettit, launches one against Sedona at an earlier December home game.

The Williams Lady Vikings varsity basketball team traveled to Camp Verde for the Dec. 28-29 Camp Verde Holiday Tournament. Williams went 1-3 in the tournament, but showed grit against a tough Prescott team in the first game on Dec. 28.

The Lady Vikings out-rebounded Prescott 50-27 in the game, however they found themselves trailing by seven at halftime. The Vikings then went on an 11 -0 run in the third quarter and outscored Prescott 16-13, however they still trailed by four. Williams then took the lead 52-51 for the first time in the fourth quarter with 1:34 remaining. The girls were able to hold off Prescott as they forced nine fourth-quarter turnovers and won the game 56-55.

With their legs gone and a fresh Blue Ridge squad as their next opponent, the lady Vikings got outscored by 12 in the first quarter of the second game. Blue Ridge got into the paint more than a kid in art class and scored 28 inside points, grabbing the victory as Williams ended the first day of the tournament with one loss and one win.

On Dec. 29, Williams took on Northwest Christian. The girls came out strong and had a 35-29 lead at half time. A sluggish third quarter by the Lady Vikes, however, gave Northwest Christian the lead ‹ which they never relinquished ‹ winning the game 50-62.

The final game of the tournament for Williams placed them up against Phoenix Christian, who went into half-time with a 28-18 lead. By the end of the third, Williams had come back and tied the game at 36. Phoenix Christian played tough defense in the fourth and allowed Williams only four points. Williams lost 40-55 and faced tough competition before the upcoming conference schedule.

Coach Frank Schulte said, "We got some much needed experience from this tournament and will take what we've learned as we continue through the season."