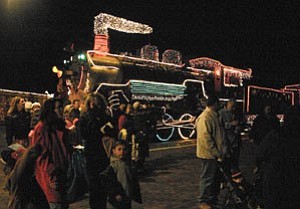 Passengers wait to board the Polar Express in December. During the 2006 Polar Express season, 71,000 passengers traveled to the North Pole.

The Grand Canyon Railway had a record-breaking year in 2006, according to a memo by GCR President W. David Chambers, who reported a 6.9 increase in passengers in 2006 as compared to 2005.

This is good news for the railway's new owners, Xanterra Parks & Resorts, who recently signed a purchase agreement with the GCR. The transfer of ownership is scheduled to occur sometime in March ‹ pending regulatory approval.

Last year a total of 237,568 passengers rode the train from Williams to the Grand Canyon, reported Chambers, who added that 7,000 train passengers were created by the addition of the new RV park, located directly west of the depot. An additional 16,000 visitors alone came to the Railway last year in order to see the railway's famous Thomas the Tank Engine. Another popular favorite, the Polar Express, reported a total of 71,000 people during the 2006 season. The surge in numbers, Chambers explained, made for a busy year for Railway employees. In his memo, he called 2006, "A year like no other."

"We expanded Polar Express for a week longer, a week later," said Chambers. "We went to a two train schedule. Exhausting is a way to describe the year. It was a long year, very busy."

Employment also spiked in 2006 in order to meet visitor demand. Railway officials credit the new RV park, pet resort and a shift to a two-train schedule for the rise in employment. The company went from 425 employees to more than 500 employees last year. Chambers said that operating costs also spiked in 2006, due largely to last year's rise in the price of gas as well as the additional manpower needed for the railway's numerous endeavors.

"Over the past two or three years our fuel costs have probably increased two or three-fold," said Chambers. "We had an 11 percent increase in revenues and an almost 9 percent jump in costs."

Chambers said the new RV park, while not hitting the numbers railway administrators hoped to see, has received a number of positive comments from visitors who stayed there. Low demand also forced the cancellation of the Sunset Limited Friday and Sunday runs. According to Chambers, word is beginning to spread about the Sunset Limited however. He anticipates a better turn out next year.

"The Sunset Limited is a very upscale train that leaves early afternoon out of Williams," said Chambers.

The Limited offers classical music, hors d'ouevres, a rim tour for visitors to watch the sunset over the Canyon and dinner on the train. A dance floor is even included on board the train. The Sunset Limited runs from Labor Day to mid-October.

No new additions are planned for the railway in 2007, said Chambers, who added that railway administrators have taken important lessons from 2006 in order to apply them better in 2007, particularly when it comes to the two-train schedule. In an effort to manage the ebb and flow of traffic throughout the depot and adjoining properties, the two-train schedule will be applied to the entire year.

For more information on the GCR, visit their website at www.thetrain.com or by calling 1-800-THE-TRAIN.