Coach says there will be Little League this spring
Lack of volunteers will not end season, but the number of teams could be limited 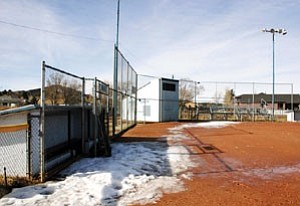 The ball fields of Williams will soon be packed with young people playing Little League.

More people means more kids and more kids means more sports. According to Williams Little League President Ted Castaneda, growth in Williams means that Little League is needed now more than ever. This year, however, things are a little different for the group. According to Castaneda, there are not enough volunteers to help coach the teams. Castaneda cautioned that even a lack of volunteers wouldn't shut the league down, however, it may limit the number of teams.

On average, little league coaches can put in roughly 10 hours a week depending on what activities the team has going on.

"Primarily we're looking at one to two coaches that we're needing," said Castaneda. "There's no minimum request or guidelines."

Coaches should be at least 18-years-old, said Castaneda, adding that the league prefers to see adult "managers" who can oversee younger coaches, or assistant coaches in training. Coaches for the major league teams are already in place, but there are a number of other teams that still need volunteers to lend a hand.

"We're looking for primary coaches. We have established, right now, three coaches for our minors. The returning coaches are coming back," said Castaneda. "Coaches are going to need to be able to teach kids how to catch the ball, throw the ball, field the ball, have their stance at the batting. It's not T-ball, it's just the fundamental structure of learning little league. As they get into majors baseball, all the rules apply."

"Unfortunately if we don't get people to volunteer, some of these leagues won't have coaches. Some of those teams we just won't have for little league that year," said Williams Police Chief and Little League Safety Officer Herman Nixon.

He added that little league coaches and board members would do everything they could to make sure that doesn't happen. Every board member or coach is willing to help show someone what to do, said Nixon, including assisting new coaches who are willing to volunteer, but unsure about their abilities to coach.

"We need people to step up and volunteer so that we can run these leagues," said Nixon.

"Baseball's very important, not only for Williams, but for everywhere. We need to get people involved to help coaching these teams."

Nixon encouraged interested parties to attend the league's next board meeting Feb. 21 at 7 p.m. at the Holiday Inn in Williams.

A growing number of kids

"The population of Williams for our kids has grown tremendously. Last year we had over 350 kids playing little league, and that's with the surrounding areas including Seligman, Ash Fork, Grand Canyon, Parks, (Valle even had a team) and including Williams," said Castaneda. "We had six little league teams, two junior teams, five T-ball teams, five minor leagues, three girl's softball. That was last year. The numbers have grown since then and so we're expecting this, plus this year we're hoping to expand."

Plans for this year's little league include new fields, scoreboards and sponsorship upgrades to include the names of sponsors on the jerseys worn by the team.

On top of everything else, Castaneda hopes to create a new team for girl's softball as well.

"We're looking to expand it to get a 13-14 girl's softball team," Castaneda said.

He added that girls typically sit out after little league until they get into high school due to a gap in team age requirements.

"We're hoping to establish something to keep the girls active and keep them going," said Castaneda.

Castaneda said little league is an important facet to the community and urged individuals to donate their time toward helping the teams in whatever way they can.

"I think it's extremely important," said Castaneda. "Little League started in Williams in 1951, but it's been extremely important for all the kids, not only in Williams, but in all the communities too. There's been a lot of youth that has started here and now gone to pro: Billy Hatcher, John Hatcher, a lot of kids that have gone through that have been picked up in college that have played. Even some that went as far as minor league for the pros."